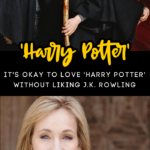 J.K. Rowling — yes, creator of all things Harry Potter — has stuck her proverbial foot in her mouth several times over the last couple years.

We first learned of her public transphobic comments back in June of 2020, and unfortunately it wasn’t an isolated event.

Since then, people have started to realize that her books are full of things that rub us the wrong way.

For one, she doesn’t add a whole lot of diverse individuals to her story. There are not many people of color, and there aren’t any openly queer individuals at all.

She also makes those little house elves out to be straight up slaves. We think of it as adding humor to the story, but slavery really isn’t a cool thing.

Once you wrap your head around the fact that this woman, who has affected your life so greatly, has such contrasting views and beliefs to yours, you begin to wonder how you can continue to support anything she has her hands in.

You are really in a quandary, because 1) you love all things Harry Potter, but 2) you find it is morally wrong to validate and continue to contribute to the success of said woman.

So, you now have guilt about how to justify loving something that was created by someone who you now find to be a despicable human being.

That really is the age old question — how do you separate the art from the artist?

When someone has worked their talent to create such a magical masterpiece, but turns out to be a horrid person, can you — and SHOULD you — continue to love their art? You wonder if you can continue to add to the lifestyle of the artist who you find undesirable.

Do you denounce the work of art because of the artist? Or can you justify loving the art while still hating — hate is such a strong word — the artist?

The debate is a complicated one. The art that is the world of Harry Potter has really become so much bigger than the artist, herself. Maybe the idea was the brainchild of J.K. Rowling, but it has taken on a life of its own.

Even Daniel Radcliffe, who will forever be Harry Potter in our hearts, has denounced J.K. Rowling. This doesn’t make him any less Harry Potter. It kind of makes us love Harry/Daniel even more.

Perhaps the answer is that there isn’t really a good answer.

You can continue to visit the world of Harry Potter by buying merch from personal vendors (like on Etsy) who don’t have a thing to do with supporting J.K. Rowling financially.

You can borrow her books — like you don’t already have them all — from the library, instead of paying money at a store where she gets a kickback on the money.

You can continue to love Harry Potter, but stay away from buying any Official Harry Potter merch — anything that would help her gain from the art.

In fact, instead of spending your money on official merch, maybe you could use that money to donate to a cause like The Trevor Project, which Daniel Radcliffe supports. This organization provides crisis support to LBGTQ individuals.

So it would be like loving Harry Potter, but railing against what J.K. Rowling stands for. Win/win I’d say!