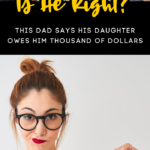 And, the Father of the Year Awards goes to — This guy. *Total Eye Roll*

This dude took to Reddit to complain about his estranged daughter. Honestly, if it were me, I’d be estranged from this awesome (sarcastic) dad, too.

He took to Reddit seeking validation that his daughter owes him thousands of dollars. Only, in my book at least, she doesn’t owe him a single cent, and he is pretty much a douche dad.

So, here’s how it went down. See if you get as infuriated as I did.

Okay, let me interject. She didn’t “abandon” them. Kids don’t “abandon” their parents. She might have chosen not to visit him, but it’s a bit of a stretch to say that she “abandoned” them, IMHO. And, seriously, he’s already showing signs of being a bit controlling as a parent.

Okay. Wait. She was in another country, with her school, for freaking 5 days, and the dude is freaking out about her not texting more than a couple times. *Eye Roll* Controlling much?

And, he is stretching by saying “she didn’t love us.” For gosh sakes, the girl is 15. She is acting out. It’s what 15 year olds do. It does NOT mean she doesn’t love the family. Get over yourself, dude.

Hold up. There’s so much to unpack in those 2 short paragraphs. First, they can’t MAKE you pay child support if she’s over 21. If he paid it, that’s on him. But, it doesn’t sound like there was an agreement that she ever pay him back. Did he just spring this on her?

Also, if he HAS to pay for half her college expenses “by law,” that would not imply to me that she owes him the money for it.

And, he made a freaking Excel spreadsheet? What in the world? I’m getting petty psycho vibes, here.

It seems to me like HE is the one who is playing games. I mean, I know there are 2 sides to every story, but he’s not making himself sound too good, is he?!?

He is going on and on about how Aria “abandoned them,” yet he is putting a stipulation on their relationship — pay the money or forget an emotional bond. Seriously. I can’t even.

Leave it to Reddit. The users came through with spot-on comments, and I agree with all of them 100%.

And, my favorite comment that sums everything up nicely:

If I ever act like that towards my kids, PLEASE someone have the decency to tell me I’m being an A-hole.