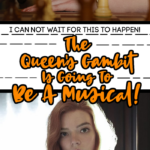 I watched ‘The Queen’s Gambit’ with one of my teenage daughters. We absolutely loved it, who would have thought a series featuring chess would be so intriguing?

When we decided to give it a go we were hooked straight from the beginning! The characters, the story, the way it was filmed, we just loved it!

I was actually sad when we finished the final episode.

If you haven’t watched it, I highly recommend that you do! It really was brilliantly done. It’s the story of a chess prodigy that grew up in an orphanage.

I just found out that now there are plans to bring ‘The Queen’s Gambit’ to life on stage! I love musicals and this is one I would seriously love to see.

Level Forward has acquired the theatrical stage rights to the novel ‘The Queen’s Gambit’ by Walter Trevis.

It is a privilege for Level Forward to lead the charge of bringing ‘The Queen’s Gambit’ to the stage through the beloved and enduring craft of musical theater.

That is all we know at the moment! We will definitely update as soon as more information is released.

I can not wait for this to come out. I hope it’s something I will have the opportunity to go see.