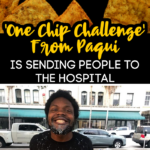 I love spicy food, but at this stage of life, my body tends to disagree with it pretty freaking harshly.

So, I’ve cut back tremendously and choose to indulge in spicy goodness on only very rare occasions.

Paqui Chips had started a challenge called the ‘One Chip Challenge’ and it turns out that this challenge isn’t very safe for everyone.

What Is The Paqui Chips ‘One Chip Challenge’?

Paqui Chips challenged people to eat just ONE chip of theirs that was made with the hottest peppers you can find.

In this case, the pepper is the Carolina Reaper which is considered the hottest pepper in the entire world.

Yea, that would be a nope for me… I love spice, but I also love to be able to breathe while enjoying my food.

They also use another pepper that is called the scorpion pepper, neither of these sounds like enjoyable experiences.

To participate in the ‘One Chip Challenge’ you have to eat one of the chips, but wait as long as you can before taking a drink to cool things down.

Like, I’m talking an entire HOUR, which sounds absolutely miserable and I wouldn’t even consider unless there was quite a bit of money involved as a payout.

You can find people trying to participate in the challenge all over TikTok, but most people fail at waiting the full hour.

The ‘One Chip Challenge’ Seems Harmless, But It’s Actually Dangerous!

In fact, there is a report from the Sacramento Bee about 3 high school students being hospitalized because they participated in the challenge!

We have had a number of our Lodi High students take part in the ‘one chip challenge’ on the school campus, which entails eating a chip that has been covered in pepper and hot sauce that causes the individual to react and become ill.

Chelsea Vongehr, the school’s spokeswoman said in a statement

Yea, that’s not my idea of a good time at all, again… offer me a huge payout and maybe I would consider it.

Apparently, the students are fine now, but they went to the hospital for just eating ONE CHIP, no thanks!

The school has actually banned the chips from campus.

We encourage our parents/guardians to speak with their children about the dangers of participating in this and other potentially harmful internet challenges.

Chelsea Vongehr, the school’s spokeswoman said in a statement

What Does Paqui Have To Say About The ‘One Chip Challenge’ Hospitalizations?

Well, they pointed out that they have a safety disclaimer about the challenge that addresses the possible dangers.

Our #OneChipChallenge includes a safety disclaimer that it should not be ingested by individuals who are sensitive to spicy foods, allergic to peppers, nightshades, or capsaicin, or who are minors, pregnant or have medical conditions.

How about we just avoid the challenge altogether?

I mean do you think completing this challenge will change your life for the better in any way shape or form?