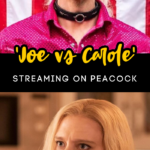 Hey, All You Cool Cats and Kittens. Just when you thought there was nothing more that could possibly come out related to the Tiger King, the Peacock network goes and surprises us all.

They are about to drop Joe vs Carole for the entire world to see, and I’m actually looking forward to it.

What Is Joe vs Carole?

It is going to be a show, streaming on the Peacock network, that will be based on the 2nd season of the True Crime Podcast Over My Dead Body by Wondery.

Joe vs Carole will focus on Joe Exotic and Carole Baskin — the people they were before all this bad blood between the two happened. It will give us a little clarity and context into what comes next.

Then, of course, the show will tackle the infamous feud that ended with Joe Exotic in prison for hiring a hit on Carole.

I wonder if they will touch on the whole — you know — Carole feeding her ex-husband to a tiger thing. Because, THAT would make for a good story!!

Who Is In The Cast Of Joe vs Carole?

The Peacock network has gone and gotten themselves what looks to be the perfect cast to play this mess of strange and quirky characters.

OMG, can we just start with Joe Exotic? I mean, who is going to be able to pull off the mullet, those clothes, that over-the-top personality of Joe Exotic?

You know John Cameron Mitchell from Shrill. He also wrote, directed, and starred in a little rock musical called Hedwig and the Angry Inch.

John famously wrote, directed, and starred in the rock musical Hedwig and the Angry Inch, about a gender-queer East German singer who escapes Germany after agreeing to gender affirmation surgery. The surgery was botched, leaving her with a one-inch penis.

So, you can see that the stretch to playing Joe Exotic isn’t that far out of the realm of possibility for Mitchell. LOL!

Then, of course, there is the flower-crown wearing, bicycle riding, big cat clothes sporting, dancing queen that is Carole Baskin. She is the epitome of quirky, and Peacock had to bring an actress worthy of that flower crown to the role that is Carole.

They hit the nail on the head when they cast Kate McKinnon, who you know as one of the funny cast of comedians from SNL, to step into those leopard-print shoes.

Just check out this list of characters that will make up the Joe vs Carole cast:

Oh, don’t worry. That’s not everyone who will make an appearance in this epic telling of the story that just won’t go away.

I can’t wait to see who else gets woven into the tapestry of this INSANE story.

When Can We Catch Joe vs Carole?

We don’t have long to wait!!

Peacock will drop all 8 episodes of Joe vs Carole on March 3rd, and I’ve already circled the date in my planner!

You can see the trailer for Joe vs Carole HERE.