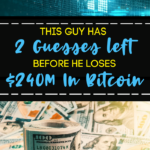 I first heard this story about a year ago, but it has progressively gotten even worse!

Stefan Thomas, who is a computer programmer, made an animated video for Bitcoin about 10 years ago, explaining how the cryptocurrency works.

Of course, he was paid for his troubles — 7,002 in Bitcoin to be exact, which was worth a few dollars each at the time.

He stored his Bitcoin on an encrypted IronKey digital wallet USB, wrote down the password on a piece of paper, and proceeded to lose the piece of paper.

Now, fast forward about 10 years to the current situation.

And, the way the things work with this IronKey is, you have 10 guesses to remember your password — and then it locks you out.

Not like, “kinda” locks you out — once that IronKey decides to lock you out, there is no way to just take it to someone professional to access the data.

This IronKey wallet will actually encrypt itself, making it IMPOSSIBLE to access the information on the USB.

How much is his Bitcoin worth now?

Well, if he were able to remember the password and gain access to the IronKey wallet, Mr. Thomas would have about $240 Million worth of Bitcoin waiting for him.

Here is where it gets worse.

Mr. Thomas only has TWO GUESSES LEFT before the thing locks him out FOREVER.

If it were me, I would have taken it to a professional the second time I was unsuccessful with my guesses!

I’d rather have someone who knows what they are doing try to find a loophole or side door to the information on the IronKey, rather than waste all my guesses that are probably going to be wrong anyway.

Alex Stamos, who was formerly the head of Facebook security, has offered to help Mr. Thomas gain access to the wallet.

According to the BBC, Mr. Thomas may own a TON of inaccessible cryptocurrency, but he isn’t the only one to lose their Bitcoin.

Currently, about $140bn worth of Bitcoin is lost or left in wallets that cannot be accessed, according to cryptocurrency-data company Chainanalysis.

Apparently, if you know how to retrieve cryptocurrency, you are going to be in HIGH demand!

We will let you know how the saga of Mr. Thomas and his inaccessible Bitcoin plays out.

1 shares
People Are Building Pallet Pools For The Summer And It's Genius
← Previous
You Can Get A Frosted Blueberry Lemonade From Starbucks For The Perfect Frozen Treat
Next →
Click here to cancel reply.