Social media has been flooded with messages about people waiting impatiently for the new baby giraffe at Animal Adventure Park in Harpursville, New York, but the only one waiting more anxiously than April the Giraffe is her baby-daddy, Oliver. This is the new four-legged power couple taking the internet by storm. And in my humble opinion, Oliver and April’s girromance is total #RelationshipGoals. 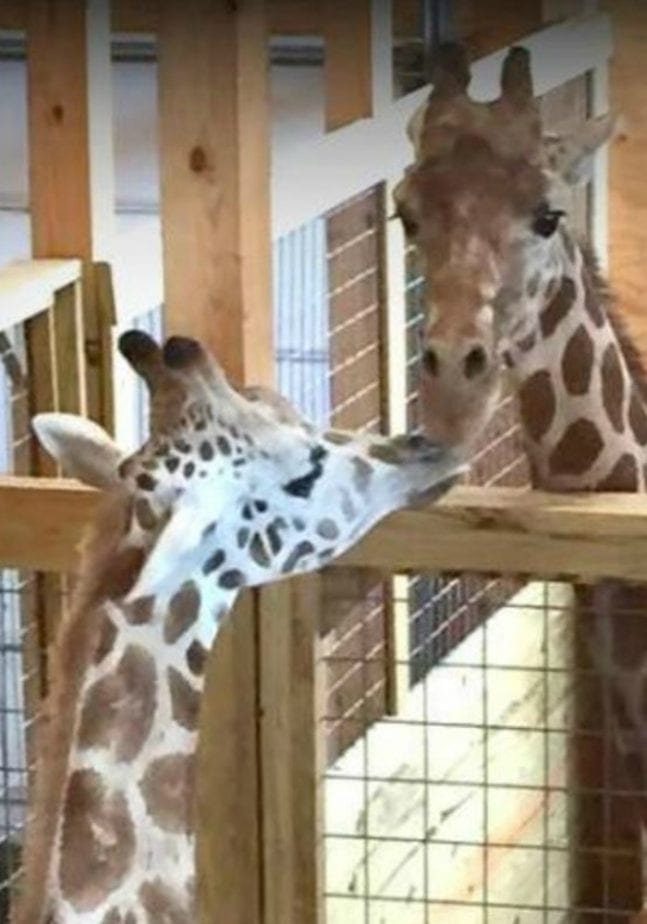 Why Oliver And April The Giraffe Are #RelationshipGoals

Because their stalls are next to each other, Oliver has been able to keep a watchful eye on the Mother-to-Be and note her increasing difficulty as her bump gets bigger and bigger.  Like most expectant mothers, the closer you get to your due date, the more strategic you have to be about being able to sit down…and then get back up. None of this is lost on Oliver.

When these two are able to be together, this guy can be found sniffing April’s rear end for signs of baby (a devotedly romantic gesture among giraffes, I assume) and rubbing his neck against hers.  He may not be able to give this tired Mama a foot rub, but neck nuzzles have to be the next best thing!

Surely, this attentive Dad understands how much more difficult this pregnancy must be.  I can’t imagine being pregnant for 15 months or having a 150 pound baby kicking me with four legs. Somehow, Oliver and April have managed to get through it all… together.

After the Animal Adventures “Giraffe Cam” went viral, most people were April-watching or would check in to see if the baby had arrived yet, but most people weren’t paying attention to how increasingly nervous the pacing Dad-to-Be was getting.

So for all you humans out there who were anxious for this special delivery, just know that Oliver and April waited much longer to welcome their baby and this Mama and her devoted Daddy are the new celebrity couple we should be watching.

April is such a cougar to Oliver! It's the equiv of a much older women hooking up with a VERY young man between 18 to 20, and she had his baby calf! Even tho she had other children and I'm guessing, 2 of them are older than Oliver due to gestation, he fell in love with an older female!