I’ll never forget being on a company retreat. I was maybe twenty-five or six at the time and my COO was in the bathroom primping for the evening activity along with one other employee. They were discussing weird hair they were getting in their later years in life. They turned toward me, laughed and said, “Get ready, you’ll start springing hair from the weirdest places at our age!”

At the moment, I think they thought I was horrified. In reality, I was jealous. You mean some people don’t live with weird hair? They only get it after hitting, 45 or 60? I’m pretty sure I’m part yeti, or at very least related to the first bearded lady… 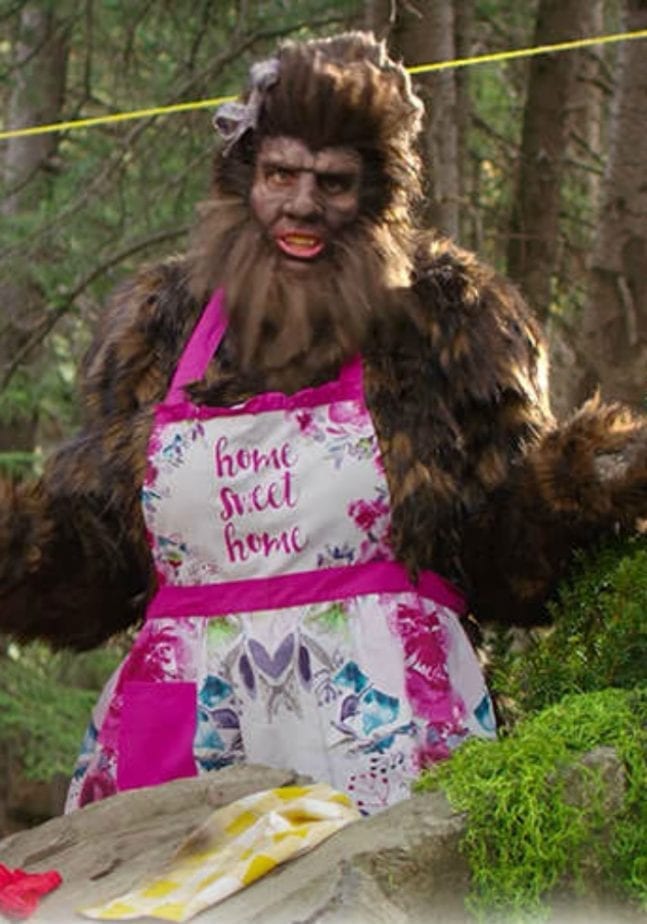 I’m Pretty Sure I’m Part Yeti, Or At Very Least Related To The First Bearded Lady…

I swear, I’m part yeti. Or, I’m a descendant of the original Bearded Lady, because if I didn’t practice some sort of maintenance I’d be sporting an enviable beard at this point.

Unwanted body hair is this chapter of Being a Woman no one really wants to talk about, unless someone is selling you laser hair removal. I’ve been managing excessive hair since I was in my mid-teens. I’ll never forget the trauma of my first couple of Nair uses or the first time I took the plunge and got my face waxed. If you skip or get lax about it, there’s few things more embarrassing than realizing you’re sporting a five o’ clock shadow or something.

At thirty I feel like I’ve got a handle on most of it. Still, there’s a moment of trepidation if my fiancé looks at my face with scrunched up eyebrows or wants to touch my neck.

Somewhere along the way we bought into this idea that women should be hairless from the eyelashes down. I’m behind this, in theory, I hate body hair, but it’s probably because I’ve got a lot more of it than the average woman. Or at least as much as she appears to have.

If you are one of the people out there that doesn’t struggle with excessive body hair, I am jealous of you. Seriously. I hope you never experience the self consciousness I do almost daily.

It seems that the most common areas for women to have “too much body hair” are usually the upper lip, chin and throat. Sometimes it’s also the arms, bottom and an out of control bush that’s spreading up and out. There’s plenty of ways to deal with these, it’s mostly just figuring out what’s right for you. 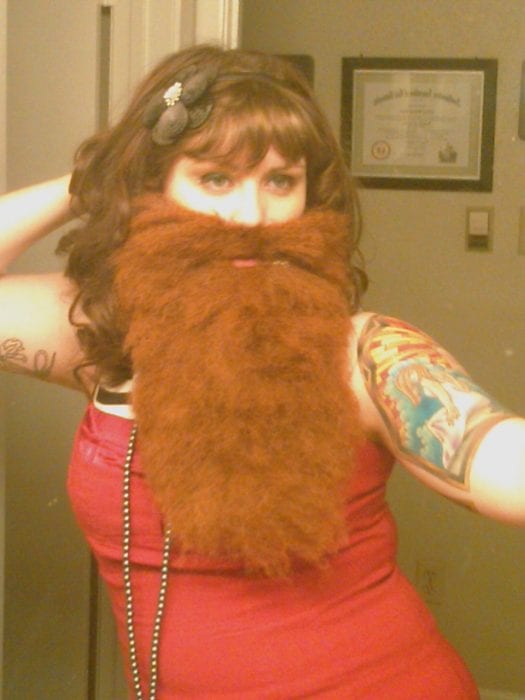 Sidney going to a Halloween party as The Bearded Lady.

I wish to God I had the money for this, because I’d do it in a heartbeat. The downside is that this is the most expensive method of dealing with unwanted hair. The downside is that if you have finer, less dark hair this method might not be the best for you. And, there’s no guarantee the hair won’t come back, though most reports say that the hair will be less unsightly.

I’ve had everything below my eyelashes and above my collarbone waxed before. It…well, it hurts like crazy, but it’s easier on the wallet than the laser hair removal. Make sure to read reviews and talk to your waxer. Oh the nightmare stories I can tell about unsanitary waxing stations… Personally, I opt to have my upper lip waxed and manage the rest on my own.

There is a wide variety of at-home hair removals that are essentially some sort of cream. From Nair to Dermadoctor, these creams have varied results. In the best case scenario, you leave the cream on for a bit and the hair goes away like magic. My experiences have been mixed. While some work as they claim to, others do nothing. And worse yet, sometimes you discover the hard way that a product isn’t for you. Always do a test area with these! Learn from my mistakes. I wound up with super bad blistering and red burns from a cream that did not do well on my skin.

Time consuming and drawn out painful, tweezing is a lot of people’s last hopes for looking presentable. I suggest using a small pair of scissors to shorten the hair and then tweeze what remains unsightly.

Yes, Yes, I’m putting this one down. I remember watching Real Housewives of New Jersey during the early years. Caroline Manzo wound up on the reality show… shaving… her face… As in, her whole face. And she became my hero. I don’t have the guts to take the plunge like that, but I respect the hell out of her for not only shaving her face, but doing it on national television.

Who cares if I’m hairy?

I’m hoping to get to this point in my life. Where my confidence in myself and whatnot is strong enough that I don’t care about a stray hair. Somewhere we bought into this lie that we have to be hairless wonders. We don’t. We have hair on our bodies for a reason. It serves a purpose. And taking off too much leaves our skin vulnerable to infection, ingrown hairs and other problems like chafing and rash due to our clothing.

What this boils down to is, be comfortable. Be you. You want to do a little hair removal? Go for it. But do it responsibly –and do it for you.