The other day January Jones did an interview in Red where she talked about being a single mom. I wouldn’t normally have given this piece a second thought. Most of these stories are just propaganda meant to make 40-year-old career women feel good about the terrible choice they made in having a career over a family. “See! Jones didn’t need a man or get married and she’s having it all!” says the woman crying in her bath with a glass of wine and a Jodi Picoult paperback. But I like January Jones. I thought she was a great Emma Frost in what are generally pretty terrible X-Men movies and Mad Men is one of my favorite shows. So I read the article and I’ve got to say, I’m not bananas about what Jones had to say. 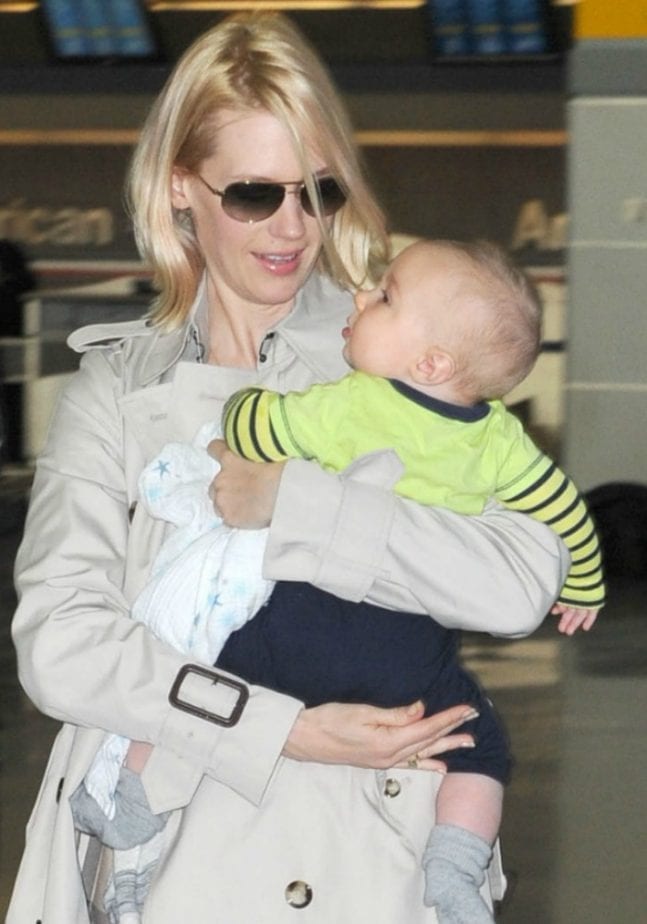 “It’s good to have strong women around a man. To teach him to respect women. He doesn’t have a male person in his life saying ‘don’t cry’ or ‘you throw like a girl.’ All those crappy things dads accidentally do.”

Yes, it is good to have strong women around a man. You know what’s also good to have around a man? A man. Just because there’s one around doesn’t mean this kid doesn’t need the other. Also, is she suggesting that a man can’t teach a child how to respect women? I’m sure there are some single dads out there who would take issue with that. As far as “don’t cry” and “you throw like a girl”, I don’t know what to say. You shouldn’t cry. At least, not in front of people. I’m sure Hillary Clinton cried when she lost the election, I would have, but you didn’t see it. Why? Because of all the many things she is, strong is one of them. She’s not going to let you see her weakness. Jesus, I can’t believe I’m saying this, but we can all take a lesson from Hillary Clinton and keep feelings to ourselves.

“I just don’t feel I need a partner. Do I want one? Maybe. But I don’t feel unhappy or lonely,”

Well, whoopty-do. Since when has the development a child been about the parent? Yes, Jones is absolutely right. She doesn’t need a partner. She’s a beautiful, rich, successful woman who has the world at her feet and she can do just about whatever she wants. What does any of that have to do with her son? Notice how this is all about her. And we’re supposed to take this as an inspiration even though 63% of youth suicides are from fatherless homes, 71% of high school dropouts are from fatherless homes, 85% of prison youths grew up in fatherless homes. Her son is purposefully being denied half of his development, but that’s okay because January Jones doesn’t feel unhappy or lonely. Well, I guess as long as she’s content…

In no way am I suggesting that a single mom should rush right out and nab the first guy who smiles at her. Quite the opposite, there is a life who depends 100% on that parent. You’ve got to make your pick count. The last thing a kid needs is a conga line of “uncles” stumbling out the door every morning. But you can’t ignore the vital role both parents equally play in the development of a child.

And this goes for single dads just as much. Kids need a mom. But you don’t hear much about what single dads are going through because nobody gives a crap. But if we’re being honest, men are much more likely to find a partner. According to Pew Research, single fathers are 41% more likely to live with a cohabitating partner. We know that we can’t do it alone but we also don’t have the media and pop culture lying to us, telling us that we can.

The media loves to hold rich, pop culture effluent people up as some obtainable goal in dismissing men from roles in the family and in child raising. They want to make Jones as an example of how a mom can get it together while purposefully ignoring that someone like January Jones is worth $5.5 million. Do you know any single parents worth $5.5 million? The single parents I know are day shift managers at Costco and probably can’t pay for their kid’s college. An overwhelming number of single parents live far beneath the level of privilege the elite share and there’s no applause for them and no magazine cover.

Being a single parent is ungodly difficult. I have a hard time just remembering all the after-school activities my kids have scheduled and I’m NOT forced to work multiple jobs because I’m the sole breadwinner. I don’t know how they do it. It’s incredible. It’s an incredible tragedy that so many families have had this situation thrust upon them and yet spoiled, rich folks just toss this lifestyle around like a fashionable handbag. Being a single parent and making the best with what you’ve been given is something that should be admired, not glorified.

*Editor’s Note: While I believe 100% that being a single mom by choice is a valid and perfect life decision for a lot of families, I also understand a lot of people feel exactly the same as the author of this post. We at Totally The Bomb like to promote varying opinions on life matters as a way to encourage discussion. Even if we don’t always agree with what our authors say.

What a load of bullcrap. Wow. Please do not write things into the internet anymore, the poor thing doesn't deserve having to bear such anti-feminist AND poorly argued propaganda (see how I used your misused term correctly? There you go).

This article is incredibly offensive and short sighted. Maybe you don't appreciate the way January articulated her justification, but your arguments to the contrary about single women who wish to be, and or CHOOSE to be mothers are ignorant and cruel. Falling in love and starting a family is the societal fairy tale that is so glorified to the extent that people who have been unlucky in love are left to believe that they aren't to be afforded the opportunity to have a family and as you put it, cry in the bathtub or whatever. Who are you? Obviously not anyone whose experienced being an independent woman making the choice to take her life into her own hands and start a family on her own terms. Why should a woman be deprived of that opportunity just because she hasn't found a worthy partner. Not every is so lucky, and shouldn't have to settle to fit in. "Making the terrible choice of career over family"?? So the only acceptable single mom is a day shift manager at Costco who can't pay for college? Building a successful career before starting a family so that CAN pay for college and you CAN raise a family on your own is unbecoming? What are you even saying here?! I'm done ranting. Your piece is hurtful garbage that should be erased from the internet. Shame on you.