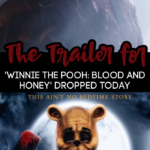 Who would’ve thought that the friendly, honey-eating bear would turn mad.

Since the infamous Disney character entered the public domain, the once nice bear has turned into a slashing monster.

Dubbed Winnie the Pooh: Blood and Honey, we all know that this story, isn’t a bedtime one.

And if the disheveled bear’s face didn’t already make you aware that this film is all horror, the plot follows a grown-up version of A. A. Milne’s classic storybook except this time, it features blood, and a lot of it.

The plot of the film tells the story around the grown-up Christopher Robin returning to the 100 Acre Wood where he originally left Pooh and Piglet or in their eyes, abandoned.

The two have since become angrier with Chris over the years and have it out to kill him.

Throughout the trailer it’s obvious that Christopher has no idea what’s waiting for him back in his old childhood stomping grounds considering he’s brought his fiancé for introductions.

And alongside wanting to kill Chris, Pooh and Piglet have plans to murder others too.

While there’s no release date yet for the chilling film, all we know for sure is that Pooh and Piglet are angry.

And you can watch the newly released trailer down below.