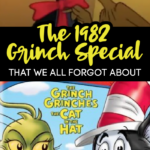 Heck, some of you didn’t forget about it, you just weren’t born yet.

Honestly, I had totally forgotten about the special that explained why the Grinch was so dang angry.

It’s called ‘The Grinch Grinches the Cat in the Hat’.

It even won an Emmy, but back then I didn’t know about those things and didn’t really care, I mean I was like 8 years old.

I vaguely remember the movie, and that was only after reading an entire breakdown of the movie on BuzzFeed.

The movie starts off with the Grinch waking up and he’s surprisingly in a good mood… something we didn’t expect from The Grinch.

He heads out of bed to get ready for the day, stopping at his dresser to comb his hair, there is a photo of the Grinch’s mother on the dresser.

As he continues to get ready, he goes to his mirror and wishes himself a good morning by speaking directly to his reflection.

The thing is… his reflection is in a bad mood and says this back to him:

I see nothing to witzel about. You must be out of your head, no doubt.

Now thinking back on this as an adult, I’m wondering does the Grinch have multiple personality disorder or some other mental disorder?

His grumpy reflection makes the Grinch take “The Grinch Oath”.

A Grinch is unhelpful, unfriendly, unkind. With ungracious thoughts, in an unhealthy mind. A Grinch is uncheerful, uncouth, and unclean…

His reflection then says that he needs to prove it, and the Grinch replies that he is “Frightfully mean”…

The happy-go-lucky Grinch is now an angry Grinch and he goes out to prove just that and pumps smog onto the singing birds and they collapse!

Then comes the Cat in the Hat, he is happy, singing and getting ready to have a picnic.

As he’s having his picnic the Grinch runs into the Cat in the Hat’s car because it was blocking the road… a little road rage I guess?

The Cat in the Hat actually apologizes to the Grinch, but he ticks the Grinch off, even more, when he calls him “Greenface”.

This makes the Grinch even more confrontational and he tries to run the Cat in the Hat off the road because he is BIG mad now.

Once the Cat in the Hat gets home, he just wants to chill and play guitar, but the Grinch had other plans… he actually followed him home, yikes!

I bet I was a little scared when I watched this at 8 years old, but I don’t remember.

The Cat in the Hat is trying to make music, but the music and his singing begin to sound really strange, then you see the glowing creepy eyes of the Grinch.

The Grinch then explains why the music and singing sound so odd, it’s because of his “Acoustical Anti-Audial Bleeper. Otherwise known as [his] Vacu-Sound Sweeper”.

The Vacu-Sound Sweeper can get rid of every noise and sound and even mess up sound waves for about 50 miles.

From now on, you will hear what I want you to hear.

He becomes obsessed with messing with the Cat in the Hat.

The Cat in the Hat is trying to figure out what is wrong with the Grinch and wonders if maybe his mother mistreated him.

Despite the grim fact that he’s depraved and deranged, I will find that soft spot.

The Cat in the Hat

I don’t want to tell you anymore because I hate spoilers, so you will have to watch it yourself to see what happens.

I’m hoping that this unlocked a buried memory for you like it did me, if you were too young or you just want to rewatch it… you totally can.

Even though they are not streaming it anywhere, you can purchase it on Amazon, or you can watch it right here!