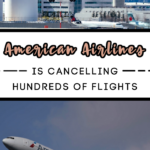 If you have summer plans that include flying, you may want to listen up.

American Airlines is canceling hundreds of flights for AT LEAST the next couple of weeks, and that’s not good news for everyone trying to get out and get away.

Why in the world would they cancel all these flights, you might be wondering.

There has been an increase on the demand for airline travel, but there are also labor shortages — not just at the airlines, but with some of their vendors — which is making it impossible to fulfill all of their flight schedules.

But, that’s not all. They are also having to deal with weather that can be a bit tricky for airline travel.

The first few weeks of June have brought unprecedented weather to our largest hubs, heavily impacting our operation and causing delays, canceled flights and disruptions to crew member schedules and our customers’ plans

They are trying to take the consumer into consideration, with most of their cancellations occuring at larger airports, where it will be easier to find alternative travel.

We made targeted changes with the goal of impacting the fewest number of customers by adjusting flights in markets where we have multiple options for re-accommodation.

On Saturday alone, the airline carrier cancelled 120 flights across their entire fleet.

According to CNN, “the company is projecting 50 to 80 flight cancellations per day going forward.”

If one of your flights has been cancelled, you will receive notification, if you haven’t already, that you need to make different arrangements.

Now, they are hoping these cancelled flights won’t last too long — but they are saying that they are projecting that there will be some flight cancellations through July 15th.

If you happen to have a flight that goes through Dallas/Fort Worth — an American hub — many of the cancelled flights will come from this airport, but they will try to spread out the cancellations throughout their system.

American Airlines has previously taken steps to deal with the travel surge, including asking its employees to volunteer to help staff Dallas-Fort Worth International Airport.

If you have one of these cancelled flights, you might want to consider taking advantage of the HUGE discount that Amtrak is offering on their 10-day rail pass — it might actually be a really viable option for you.