Meet Augie, The Oldest Golden Retriever In The World 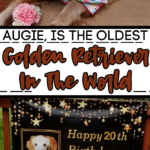 If you own a dog, you know that dogs mature more quickly than humans.

You also might have heard that one year of your dogs life is equal to seven human years but as it turns out, the math isn’t that simple and the age of your dog actually depends on the size and breed.

Not only has Augie made history books, but she has also doubled the life expectancy of her kind!

Most Golden Retrievers only live up to be 10-12 years of age, while some have reached beyond that age, Augie is the first known Golden to reach the big two-oh.

Augie has lived with several different families throughout her life, has been adopted and rehomed twice before she met her forever owners Jennifer and Steve Hetterscheidt in Oakland, Tennessee.

Augie found her forever home at the age of 14 and even though she was considered old, the pup was very healthy considering her age!

Similar to old age in humans, Augie was diagnosed with a health problem regarding her kidneys but has since, been eating a mix of wet and dry food along with some supplements to help mitigate the issue!

To celebrate her birthday, her owners organized a fun-filled party with a banner that says “Happy 20th Birthday Augie” with her picture and a carrot cake, dog friendly of course.

Her siblings, Sherman, Belle, and Bruce were also there to celebrate Augie’s special day.

Although, sadly after celebrating her 20th birthday, Augie’s mom shared the news that the beloved dog passed away and is now in doggy heaven.

Augie will certainly be missed and hopefully wherever she is, there’s an unlimited amount of doggy treats.

2 shares
This Borzoi Sighthound May Have The 'World's Longest Nose' And She Is Adorable!
← Previous
You Can Get Solar Powered Mushrooms To Light Up The Night
Next →
Click here to cancel reply.