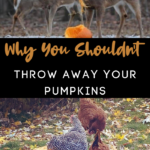 The cunning smile on your jack-o-lantern has slowly slanted after another spooky season has come and go.

However once Halloween is over, here’s why you should resist throwing away your pumpkins after the haunting holiday.

If you happen to live near an open field or a patch of woods, consider taking the time to drive out to one if you can to discard the handful of pumpkins that were sitting on your porch all spooky season long.

Thanks to a viral PSA Facebook post, explaining that pumpkins are safe for wildlife to eat, the seeds inside also act as a natural dewormer for the pumpkins that were never carved.

Keep in mind to break open the pumpkins so deer don’t get their heads stuck inside.

Out of the 1.5 billion pumpkins that are produced each year, only one fifth gets reused while the rest end up decaying in landfills which also create methane gases which harm the environment, according to the post.

So in other words, recycle your pumpkins for wildlife to munch on or give a bucket load of the orange vegetable to a local farmer to use as a snack for cows, pigs, or chickens.