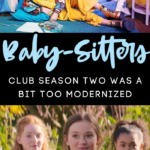 Whenever Netflix released The Baby-Sitters Club as a new, modernized show, I was SO excited to watch it and, in a sense, re-live my childhood!

I obviously started watching the show with an open mind. It’s been over 20 years, so of COURSE it’s going to be different and more up to date.

Season one was great! There was a lot of modernized things, but they kept the nostalgic aspect in that made so many memories return! But season two was a little less satisfying for me.

I felt like, rather than focus on modernizing the classic series, the goal was to push a LOT of agendas. And whether I agree with the agendas pushed or not, it just left a bad taste in my mouth.

I’m still hoping for a season three, I just hope they focus more on the dynamics of the girls growing up and learning lessons and a little less on pushing opinions onto the watchers. We shall see…