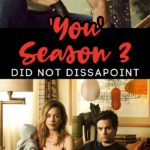 DUDE. If you haven’t completely blown through Season 3 of You yet, get on it and get back here! We need to talk!

The very first episode actually had me really worried at first. It seemed very dull and just history repeating itself.

But after quickly being reminded of how crazy Love is, everything flipped and I was HOOKED. I mean, the first murder happened in the first episode!

I also wasn’t a huge fan of who Joe was going for and didn’t understand her importance. I may still be bitter of her role in One Tree Hill. (don’t come for me). So I was actually totally ok with Love off’ing her to make life a little more interesting. (once again, don’t come for me!)

So while Joe is already wrapping his head around being stuck with Love forever and now being a dad to a son who he is NOT bonding with, he has to go back to his old ways to keep his family safe.

So rather than same old, same old, he’s usually cleaning up Love’s messes and trying to figure out how the hell to get away from her without getting killed in the process. I have to say, this season was delightfully delicious.

More murders than normal. More strange characters than normal (*cough* Sherry…wish she had died), a love interest I was ACTUALLY rooting for as long as she didn’t end up dead.

And THE most heartwarming part was when Joe entrusted his own son in the hands of Dante and his partner, who had been trying to adopt for years. I melted.

Season 4 has already been renewed, so my only complaints really are: why couldn’t there have been more episodes, can Sherry still die, can we see more of Dante and his family, and how long do we have to wait this time?