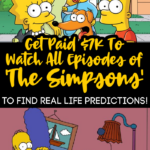 Most people know that ‘The Simpsons’ television show has somehow managed to predict many real-life events well before they ever actually happened.

The thing is, they DID actually happen… how did they do that?

It’s pretty freaking eerie in fact, here are some of the things from the show that did actually end up happening in real life:

I’m sure there are even more, but this list alone is insane!

So what are we expecting for the year 2022, have ‘The Simpsons’ predicted the future once again?

Well, one company is so invested that they will pay you to help them find out and they’ll even give you a weekly box of donuts, and an extra $100 to cover expenses for wifi and the cost of Disney+.

The company throwing the money down for this is a UK gaming site called PlatinCasino.co.uk and the specific job title they are hiring for is “Simpsons Series Analyst”.

It’s a well-known phenomenon that The Simpsons has predicted major life events, and in our industry we too like to predict what the future has in store for us. So, after a hard couple of years, we at PlatinCasino.co.uk are intrigued to see what 2022 will hold…

the company described in its job application.

If you get the job you will have to watch every single episode of ‘The Simpsons’, the job lasts for 8 weeks and there are 33 seasons of the show, oh and don’t forget the movie!

While watching the episodes and movie, the person that scores the job will need to look for any other real-life events to add to the list of predictions.

to note down standout events from the show, to help us predict the probability of each one happening.

the company described in its job application.

Applicants should love ‘The Simpsons’, though it’s not a requirement… but you are required to be 18 or over and speak fluent English.

If you think this job is for you, you can find the application here, good luck!

I love the Simpsons