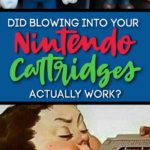 Well, this is just one of those times where we are going to have to agree to disagree.

The PBS Digital Studios claims that blowing into your Nintendo 64, NES, and SNES never really worked to make the games play.

I’m pretty sure that my blowing abilities — wait, that didn’t come out quite right — I’m almost certain that every single time I did my breathing ritual into my Nintendo game cartridge, it magically made it work!!

We’ve all done it — with the exception of you younger kids who are never going to experience the MAGIC of the early Nintendo consoles and games!

Your Nintendo game cartridge quits working, and you immediately take it out and blow into it, across it, or maybe even open up the console itself, and give it a good blast of mouth air.

Turns out — allegedly — that the “blowing” tactic never actually did anything but possibly damage the game.

Do not blow into your Game Paks or systems. The moisture in your breath can corrode and contaminate the pin connectors.

Now, I can’t tell you how many times I’ve tried this blowing tactic, myself. It’s probably in the millions at this point.

But, not only has PBS Studios debunked — allegedly — this tactic, but Chris Higgins at Mental Floss also makes the “claim” that blowing into your cartridges did nothing but perhaps ruin them.

When things went wrong inside your NES, the problem was usually a bad connection between the cartridge and its slot. — Blowing in the cartridge did not help.

I’m not sure that I will EVER believe that. I’m going to do the adult equivalent of sticking my fingers in my ears and singing, “Lalalalala.”

My money is on the blowing thing being a pure placebo, offering the user just another chance at getting a good connection. The problems with Nintendo’s connector system are well-documented, and most of them are mechanical — they just wore out faster than expected.

So, believe what you want — blowing into the cartridge works almost every time, or, you know, science.

I choose to ignore the science, and stick with the facts that are solid in my world. I’m definitely Team Blow-In-Your-Nintendo-Cartridge.

And, I always will be, so there.

What do YOU think of these Nintendo findings?

That's probably why, my 17, old and not working, N64 cartrigdes started working after blowing into them one by one. This article is purely made for clicks and advertising