Now, I know this isn’t the normal kind of book I write about, but it was just too good NOT to mention to you guys. You see it’s all about goofy deities and plain ‘ol normal people–but of course it’s so much better than that. 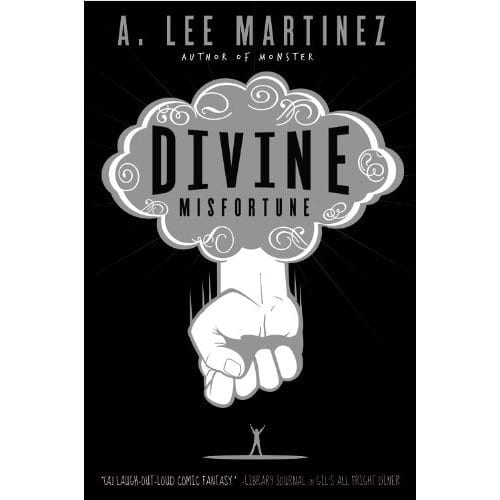 Isn’t that cover freakin’ awesome? It totally tells the story in one shot, too. I just think it’s cute that the gods aren’t the gods we all know and love, and the monsters and such aren’t like the monsters we always read about–well, they ARE, but in a totally different and kick butt way.

Just go read the book. Trust me, it won’t disappoint.

*Sure, he says the A stands for Awesome, but he tells lies for a living… just sayin’.

LOVE that cover. I have total cover envy lately. I want one! .-= Lisa´s last blog ..Learning How to Fall =-.

I know you're not supposed to judge a book by its cover and all, but that cover rocks. Would totally read that, and I have no idea what it's about!

Yeah, I was all over that book. It's a keeper. .-= @jmartinlibrary´s last blog ..DIVINE MISFORTUNE by A. Lee Martinez =-.