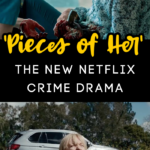 I just got done binge watching Pieces of Her — the BEST new crime series on Netflix — and it is the show everyone is going to be talking about.

Seriously. I watched it in 2 sittings — don’t judge. Literally, the only reason I didn’t watch it in 1 sitting is because I started it late in the evening.

The point is — I couldn’t stop watching. I HAD to know what was going to happen to Andy and her mom, Laura.

It’s kind of hard, at first, to tell what the heck is going on in the show. In the first 10 minutes or so, there is a murder in a restaurant. Laura goes into “mom mode” — protecting her daughter at all costs — and ends of slicing the throat of the murderer.

This stuns everyone, because Laura is just the town speech pathologist. She pulled out some military esque moves in stopping the murderer, yet she had never been near violence.

Things get weird when Laura tells Andy not to talk to the police about the situation.

What in the world is she hiding? Is she delirious from losing so much blood?

Things take an even darker turn when she tells Andy she has to move out — that night. This mom, who had just done everything to save the life of Andy, now wants her out of her site.

What in the actual world is going on?!? Nothing is as it seems.

This crime drama unfolds piece by piece, and you never know exactly what the heck is going to happen.

But one thing’s for sure, you’re going to want to keep watching to find out.

Pieces of Her, which is based on the bestseller by Karin Slaughter, just dropped on the streaming network on Friday, and the buzz is already amazing.

In a sleepy Georgia town a random act of violence sets off an unexpected chain of events for 30-year-old Andy Oliver and her mother Laura. Desperate for answers, Andy embarks on a dangerous journey across America, drawing her towards the dark, hidden heart of her family.

When you’re done with Pieces of Her, you have to check out Des. It’s based on a true story, and it’s CRAZY!!