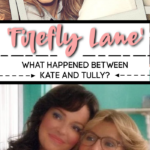 Are you watching Firefly Lane? If not, turn away right now, and go binge watch the series!!

I am about to drop some spoilers on you that you are NOT going to want to know until AFTER you watch the finale.

I loved Kate and Tully’s friendship throughout the entire show. They were so close — like I’m a little jealous of the bond they had with each other.

But, that ending, though!!

What the heck happened that caused such a rift in their friendship? It seemed like nothing could tear them apart.

See what I did there? If you don’t get it, go back and watch the ending.

Here is what I think — and keep in mind, these are just my thoughts. We won’t know what ACTUALLY happened until AT LEAST next season, should there be one.

So, my theory is that Tully slept with Johnny — again.

Kate was still crazy in love with Johnny, even through the midst of their divorce.

BUT, there is that history there. It wouldn’t be a far stretch to think that Tully and Johnny got together — again.

It is the ONLY thing that could cause Kate to HATE Tully so much.

I mean, she has so much animosity towards Tully at the end, Kate doesn’t even want her near the funeral of her father. That is harsh.

It KILLS me that the season ended on such a note! Talk about cliff hanger!! I HAVE to know.

They better come out with a Season 2 FAST!!

Do you have any other theories?? I want to hear them all!