So instead of working on ANY of those projects, I’m going to write a blog post about procrastination. Makes sense, right? Also, I’m probably going to procrastinate on this post because let’s admit it: procrastination is that friend that you hate to see, but love to party with. And this bitch and I GET DOWN! 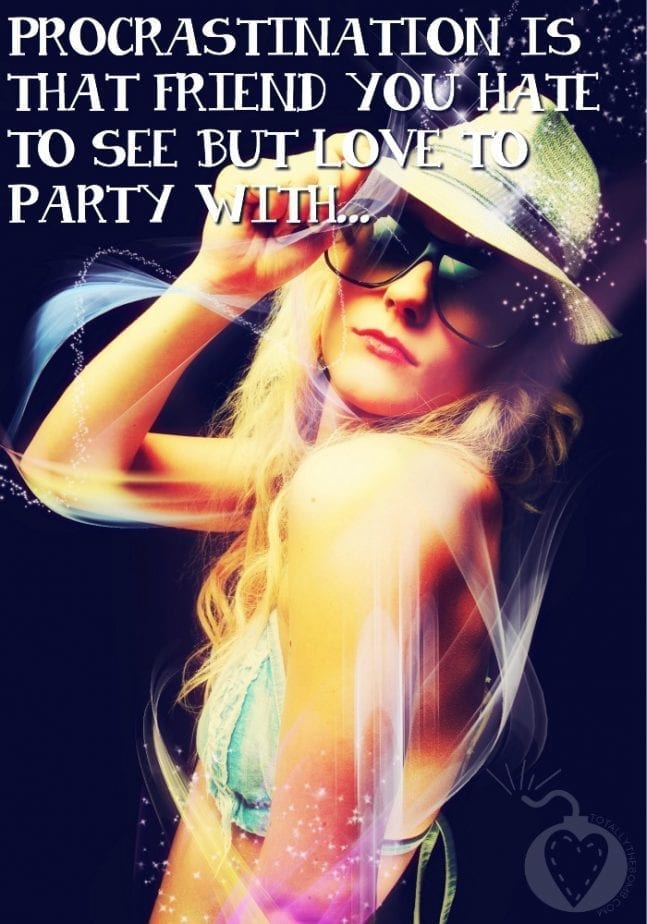 It’s like that obnoxious friend who shows up late to the party, right when you were getting ready to tidy up with a fresh bottle of Jack and no reason to be up early in the morning. You want to tell them to go home, or at the very least stay out of your way. But you know from previous experience that it won’t work. You try to clean around them. But they keep offering you a shot. After a few minute you tell yourself, Hell, I tidied the coffee table. I deserve a treat.

Three hours later, you find yourself surrounded by old vacation photos that you just sort of wanted to organize like three years ago, and somehow the house is an even bigger mess than when you started to clean.

Procrastination is a bitch.

I guarantee you I didn’t set out to write this post when I sat down at the computer. But the giant list of things that really REALLY need my attention is daunting. It’s easy for me to snag a stray thought and start a blog post. I think, “I’ll just jot a few ideas down…and now I’m at 250 words…I might as well finish it.” No. Bad Sally!

So, how do I stop writing this post and instead focus on what I actually should be doing? Well, my list of “To-Do’s” is large and daunting. Work on my manuscript? It’s only like half done. I’m never gonna knock out another 40k words in 2 weeks. Pass. Work on my pitch? That I’m definitely going to have to do, but it’s so much easier to bounce ideas off of another person so I’ll wait. Freelance graphic design jobs? I don’t have my paints with me… Organizing my class? My slides are at home. Keeping my house clean? Well, I’m at the office on my lunch break so that’s out. Of all the things on this list that I can actually work on, my manuscript is number one. But I kinda just want to write this blog post….

Oh man! My word count is almost 450! I have to finish this now. I shouldn’t. But I mean, since you’re reading this it means I did. Yay! I feel so accomplished!

That, my friends, is procrastination’s sweetest lie. I finished something I didn’t really need to work on. Like at all. There are tons of really talented writers for Totally The Bomb. I could leave it to them to entertain you readers with life’s little truths for a couple of weeks. Instead, here I type. Why? Because I feel like I got something done. I can check something off the list. Except this little side project wasn’t even on the list.

Procrastination isn’t about not working on what you REALLY need to work on. It’s about working on something you really DON’T need done. It’s a subtle difference. But in the hour I spent working on this post, I could have had a preliminary book pitch hashed out. Would it have been finished? No. But it would have been a foundation from which to start. Instead I took this time and energy and put it into something I didn’t need to do. Why? Because I didn’t break my “To Do” list into smaller parts. Instead of looking at the 40 words I need to write before this draft is done, I need to just tell myself to write 800 words. It doesn’t seem like much, but that’s about what this blog post is. And if I wrote 800 words a day, I’d have my 40k words in….50 days. That’s less than two months. Suddenly finishing this manuscript doesn’t feel so daunting.

And I don’t have to have my entire pitch done in an hour. I can let myself work on it in 30 minute increments, because I know if I put it off too long I’ll end up working on it for 2 hours straight while crying and cussing at past Sally for being so irresponsible.

Every task can be broken down into smaller, much easier to chew jobs. That’s what procrastination doesn’t want you to know. It wants you to see the problem as a whole so it can just hand you the bottle of Jack and cover you with a blanket as you turn your back on what you really need to get done.

Tell procrastination that the party is over before they even walk in the door. But take the bottle of Jack. You’re not a sucker.