My dog Bosco watches television. Not just a few minutes here or there, but the whole show, and he has his favorites. He’ll sit in front of it so close I’m almost concerned about his eyesight, especially after my Mom used to tell me, “Don’t sit so close it will hurt your eyes.” Will it hurt his eyes? The Vet doesn’t seem to think so, yes I’ve asked…because I can’t get him to stop, or back away. It’s almost more entertaining to watch him then it is to watch the TV itself. Because he becomes so engrossed, you can watch his head move as the characters on the screen move, whine at a random animal and even search for an animal that was in a previous scene. It’s really quite amazing that he watches so much tv and for as long as he does. 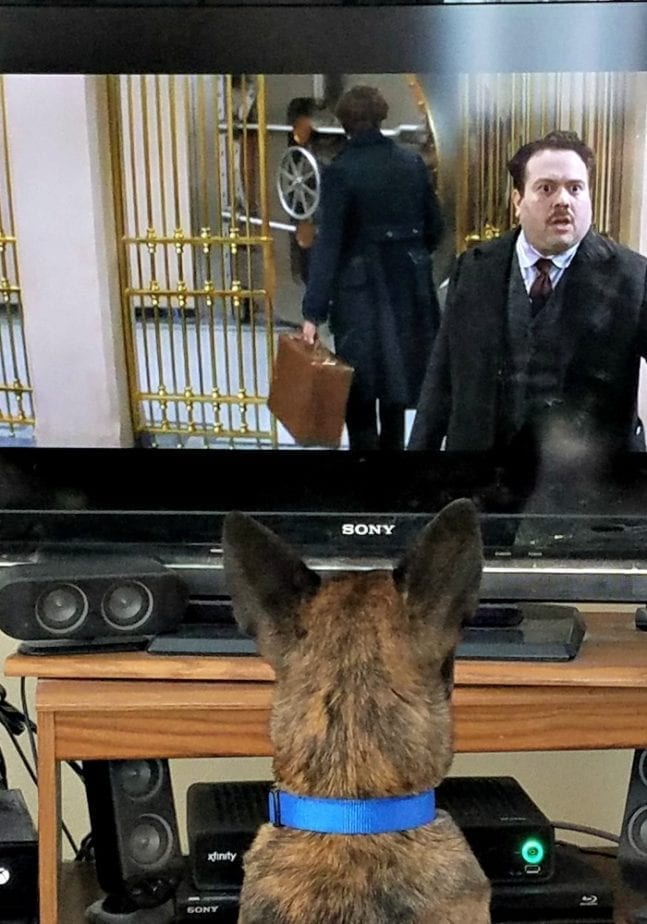 I Think My Dog Is Addicted To TV

When he was younger only the sounds of dogs barking would catch his interest and only for a few seconds then he go back to his normal dog stuff and ignore it. Now, it’s become a serious thing for Bosco. Literally whole shows and movies and there doesn’t have to be animals involved at all to peek his interest, although most of his favorites have animals in them.

One of his favorites is Frasier. He loves Eddy, and he knows Eddy’s name when I say it. I really think he thinks this is real life. Like ASPCA commercials (which already break my heart to watch) really get me when he sees them and whines the whole time, as though he feels their pain. He’ll turn and look at me as if to say, “Help them Mom!” I now try to change the channel as quick as possible when one comes on or I spend time consoling my poor dog who is clearly upset by these abused, neglected animals. He’s very, VERY sensitive, about everything, including television.

One of his other favorite shows is COPS. When the K9’s are on, he likes to think he’s helping by growling along with them or barking at the bad guy. At this point all I can do is encourage his reactions by telling him, “Good boy, Boss…you got em!” just so he’ll be quiet.

The doorbell on the Swiffer commercials always make him jump up and run to the door barking as I sit on the couch trying to convince him, “It isn’t real Boss…it’s on TV.” He’ll look at me, look back at the door, look at the TV and then calm down. But, it never fails,when that commercial comes on, he lets me know someone is at the door.

I’m a little ashamed to say that he’s a big fan of the Real Housewives of Beverly Hills. I’m pretty sure it’s because of Lisa Vanderpump and her plethora of animals, but he’ll watch the whole show along with me, even when Lisa isn’t on the screen holding one of her pups. I’ve never seen a dog so entertained by the television and I’ve had a few dogs in my life. I’m almost wondering if he’s all dog.

Aside of the concern for his eyesight, I’m also concerned about the well-being of my television. Bosco has a tendency to lunge at small animals on the screen making the TV rock back and forth, it’s really only during those times he’s scolded with a stern, “Bosco, no! It’s not real!” But to him, I think it’s very real. We had to say that to him more than once today as we watched “Fantastical Beasts And Where To Find Them.” Nearly every ‘beast’ perked his interest and he was ready to jump into the movie to be a part of it.

If I even dare turn the TV off during a scene with an animal, he’ll promptly look behind the TV for it, look back at the black screen and then look at me like, “Where’d it go? What did you do with it?” Occasionally he’ll whine in disappointment. Yes, I’m sure of it…my dog is addicted to television. The nose prints left behind on the screen are constant proof that my dog has a problem.

Do you have a quirky animal? Tell us about it in the comments below!

My dog ivy is obsessed with the tv, my iPad and anyone with a phone. If she here’s a video on someone’s phone she rushes over and leans on their arm to see the screen. She watches tv all the time. She sits in front of the tv and whines until I turn it on. She watches my iPad in bed and I often wake to find her still watching hours later. I thought this was normal. Apparently not!

You can watch all TV channels for free on your Android and iOS devices using TVTAP app.

My dog is literally obsessed with tv too. She will watch it all day.