Categories Heavy Handed Advice, Hot Off The Press, Pop Goes The Culture, These Things Are Better Than Your Things 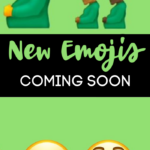 Emojis are how we show our expression through chat since text messaging, isn’t exactly face to face.

But regardless of what the future of technology might bring because we all know text messaging will be way more advanced than what it is now, new emojis may be coming soon to the nearest iPhone or Android near you!

New emojis including more diverse and gender-inclusive emojis, courtesy of Emojipedia are up for approval this fall by the Unicode Consortium for the next emoji release!

According to Emojipedia, among the new batch of faces and shapes will include “consistent gender options for pregnancy and royalty, ‘heart hands,’ and the ability to choose from 15 different handshake combinations.”

Within the new fresh batch, you can expect transgender and non-binary pregnancies, handshakes in various skin tones, several new facial expressions including a melting face (just in time for the Twilight saga to hit Netflix), a peeking eye, tears with joy etc.

We can expect the majority of the emoji candidates to end up on the final list which should be released on Sept. 14, mentioned Emojipedia.

“This list in particular has been worked on for a longer period of time, after Unicode 14.0 was delayed due to COVID-19,” they explaind.

“The above additions will mean that nearly all emojis can have default a gender neutral option, with choice to use a woman or man where relevant. A few exceptions remain, which are being reviewed, as per this Unicode Emoji Subcommittee report from 2020,” Emojipedia says.

The winning emojis are decided by online voting from the public and according to the encyclopedia of emojis, the approved creations could be available as early as late this year while the majority of updates will take place in the first half of next year in 2022.

So, fingertips at the ready for your favorite collection of emojis, and GO!

1 shares
The Entire Twilight Saga Is Finally On Netflix And The Tweets About It Are Hilarious
← Previous
You Can Get A Baby Yoda Shaped Pet Bed For The Cutest Way To Sleep In The Entire Galaxy
Next →
Click here to cancel reply.