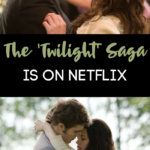 The entire Twilight series is finally available at our fingertips and we know you just microwaved a bowl of popcorn (extra butter, of course) right after you finished reading that sentence.

Courtesy of Netflix, the entire Twilight saga is out on the popular streaming platform including all five movies featuring Twilight, New Moon, Eclipse, Breaking Dawn Part 1 and 2 on the flat screen TV of your living room.

With all five steamy movies coming to Netflix, Twitter has been most recently filled with overwhelming emotion about binge watching Jacob taking his shirt off and Edward glowing in the sun.

No seriously, fans can’t get enough of the vampire family and the wolf pack.

With that being said, New Moon is already rated top ten in the movies categories, no surprise there.

While we recommend watching one movie per night instead of staring at the television for all several hours at once, just incase you’ve come down with a case of the vampire flu, a fuzzy blanket and wine might just do the trick.