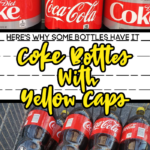 I had no idea this was a thing! If you’ve noticed bottles of Coke that have a yellow cap, there is an important reason they have it.

To be honest, I didn’t even know this was a thing and I can’t remember the last time I have seen yellow caps on coke bottles. Can you?

Well, there is a perfectly good explanation…

Here’s Why Some Bottles Of Coke Have Yellow Caps

For starters, the yellow caps still contain the original formula, however, certain bottles of Coke have yellow caps because they actually are kosher for Passover.

Coca-Cola is certified kosher year-round, but during Passover, there is one ingredient in Coke that is not to be consumed!

Passover is also known as Pesaḥ or Pesach, in Judaism, and is a holiday commemorating the Hebrews’ liberation from slavery in Egypt. As well as the “passing over” of the forces of destruction and the sparing of the firstborn of the Israelites.

During the Passover, Jews abstain from leavened foods in recognition of the Jewish people who fled the pharaoh. This includes avoiding foods made with barley, rye, wheat, spelt, and even oats.

Many Ashkenazi Jews do not eat corn or corn by-products during Passover.

This means anything that has corn and corn by-products, like high-fructose corn syrup, is not allowed during Passover.

Well, we all know that Coke is made with high-fructose corn syrup these days.

So, Coca-Cola has yellow-capped bottles to show that those bottles are made without the high-fructose corn syrup, they are also marked ‘Original Taste’.

These yellow-capped bottles of Coke are also made without alpha-amylase which is derived from barley.

Coca-Cola is making the yellow-capped bottles of Coke with sucrose or cane sugar!

Apparently, Coca-Cola began making a kosher version back in the 1930s. The Passover Coke’s are normally priced the same as regular Coke’s, which is great!

People observing Passover are not the only people who seek out the yellow-capped Coke.

Those that want to avoid high-fructose corn syrup use this time of year to stock up on the yellow-capped Coke’s too. I can’t believe I didn’t know this!

Seems to me that if it doesn't contain CORN syrup, the cap should be white. Corn is yellow after all.

why was the color yellow chosen ? reminds me of history.

make them available yr round.