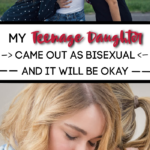 You think you know what you are going to say and do — until it actually happens.

I had so much going on in my mind, I wasn’t in a great place to sit and listen.

My daughter tapped me on the shoulder as I was stirring meat on the stove with one hand, and trying to work from my phone in the other hand.

I turned around, and my stomach dropped.

I could tell by the look on her face that something had happened, or she was about to tell me something life changing.

She said, “I have to tell you something.”

I dropped my phone on the counter, and said, “What’s wrong?”

She merely looked at me and said, “I’m bisexual.”

Now, keep in mind, my kids have led pretty sheltered lives — or so I thought.

I took a big gulp, and said, “What?” not sure I’d heard her correctly.

I always thought I would be pretty cool, calm, and collected if this moment ever presented itself.

But, everything I’d ever told myself I would say, whatever way I had thought I would act, and a bit of my brain flew right out the window at that moment.

I tried not to pause — I don’t think I did — and I immediately hugged her.

The first thing out of my mouth was, “How did you even learn that word?”

Maybe it wasn’t the BEST first thing to say, but don’t judge.

“I knew I liked both boys and girls, so I looked it up on the computer.”

I think she started crying. I don’t know. I know at some point she was crying.

I kept hugging her and telling her I still loved her, and it was okay.

Now, we are a family that believes in going to church.

I mean, we have a pretty strong faith, but we aren’t like those fanatics that stand on the street corners yelling and shoving bibles into people’s faces.

My kids have grown up in church — not a Sunday school every week before the actual service kinda church, and not a church that has services every Wednesday night kinda church, but just a solid church.

So, the next thing out of her mouth was, “I was afraid to tell you, because I know you think it’s wrong.”

Keep in mind, I had never told her this. We had never actually talked about it.

I didn’t even consider this was going to happen in any way, shape, or form yet.

I mean, she’s never been “boy crazy,” but I figured she was just behind the curve in that area.

My brain was going a million miles an hour — or maybe it had gone quiet and numb — I don’t even know.

I couldn’t breathe. I couldn’t really speak. I was just in shock.

I just kept hugging her and telling her we still loved her.

In the midst of the moment, I just kept thinking of Jojo Siwa’s parents, and how they handled the situation.

I thought back to a friend who last month told me, “There will be some point when your teenager completely breaks your heart, and it’s important to immediately hug them, and not dwell on the devastation they’ve caused.”

I remember thinking, “Surely this won’t happen to me.”

I didn’t realize that not ony would this time come, but it would be here so soon — but I thanked God my friend and I had had that discussion!

My brain just kept telling me to hug her. Love her. Don’t make her feel worse than the situation already was — because you know she was confused and hurting.

I asked my daughter if she had a girlfriend.

She said, “No,” but there was a girl at school who she had feelings for, and she knew she felt like she wanted to be more than friends with the girl.

I’m going to be really honest, I had NO idea — AT ALL — what to say from here on out.

I just kept hugging her, and telling her I loved her.

But beyond that, I couldn’t really tell you what happened.

I can tell you, I was immediately heartbroken, not just because this was shocking news, but because I knew this would mean my daughter had to grow up in a big way.

It meant she had to make some really grown-up decisions, and I couldn’t really be “Mom,” and help make those decisions for her.

I know I said things, but I couldn’t tell you what they were.

I know I kept telling my brain to be calm and just show love and support.

My daughter and I have had a couple of brief conversations in the days since.

I told her in the car the other day, “I don’t remember much of what I said. I was in shock. I really hope you thought I was being supportive. I hope I said some right things.”

She didn’t say much.

“I don’t want you to feel like we think you are a “bad” person. This doesn’t change anything between us,” I told her today in my room.

She didn’t say much.

I tell you all this to say, it’s really easy to sit behind a computer and say or think you will act a certain way in any given situation.

BUT, in the moments that life throws us curve balls, we don’t always get it exactly right.

Did I say all the right things? No.

Did I do all the right things? No.

Just do the best you can.

Ask for forgiveness if you screw it up.

And for goodness sakes, don’t judge how others act in certain situations until you actually go through them.

Your reality may be so much different than you think it will be.

I think you handled the situation perfectly, as perfect could be. Your daughter will be okay. Be glade that she expressed this to you now. You were right about her having to grow up faster, but it is not a bad thing. Coming from someone who knows all to well about coming out, still trying to come out. I look back and wish I would have expressed this to my parents when I was a teen. I waited until I was a freshman in college. My parents and I are Catholic, just like you family were we went to church on Sundays, but not super crazy and all the time. When I told my parents, the shock went overboard into mental break down and hysterical crying. I was told that I needed to go talk to the priest and I needed help. It was a very traumatizing experience in my life. I still lived at home through out college and I just had to keep that part of my life a secret. I still went on dates, but always had to say something else as where I was going or who I was with. I have been in a relationship for 6 years now and I love him to the moon and back. He had the same kind of home life that I did, so he understands what I went through, still going through. If I could give you any advice, just love your daughter. No matter what, tell her you love her and whatever she pursues in life, support her. I think that is the one thing I wish I was told when I confessed to my parents about myself.