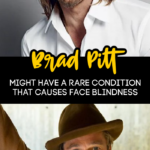 Anytime Brad Pitt is in the news, my ears perk up just a little bit.

I have LOVED Brad Pitt ever since seeing him in Legends of the Fall. OMG — that is one beautiful man.

But, today he is in the news for something that might be just a little bit of a downer.

Brad Pitt has admitted that he thinks he might have prosopagnosia.

He told GQ that, although he has never been diagnosed, he believes he might have the rare disorder that causes you not to recognize faces.

According to the NINDS, prosopagnosia is also known as face blindness. It is usually present at birth, while sometimes it can be caused by a “stroke, traumatic brain injury, or certain neurodegenerative diseases.”

Can you even imagine being a young child, and not recognizing your own parents?!?

[Brad Pitt] struggles to remember new people, to recognize their faces, and he fears it’s led to a certain impression of him: that he’s remote and aloof, inaccessible, self-absorbed.

Now, of course, he doesn’t want to have this disability. He said he is ashamed, because he has such a hard time at parties and other social settings.

This is not the first time Pitt has admitted that he has this problem.

Back in 2013, he did an interview with Esquire where he said people get offended by his disorder.

So many people hate me because they think I’m disrespecting them — Every now and then, someone will give me context, and I’ll say, ‘Thank you for helping me.’ But I piss more people off.

He says that he comes “from such a design/aesthetic point of view,” but can’t remember a person’s face.

That would be so frustrating!

So, just know, if you ever meet Brad Pitt in person, he may think you’re someone else altogether.

Be patient and kind. Don’t point out the obvious fact that he’s never met you before.