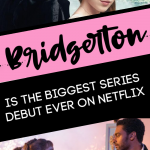 Dear readers, it has come to our attention that there is a show that has taken Netflix by storm, and it is now the BIGGEST series debut EVER on Netflix.

Of course, I am talking about Bridgerton, and this author agrees 100% with those that say this show is a must-watch, binge worthy series.

This Shondaland production, with Chris Van Dusen Brought at the show runner helm, and Shonda Rhimes, herself, as producer, has just gone CRAZY in popularity!!

Over 82 MILLION people watched Bridgerton in just its first 28 days on Netflix!

That crazy big number of people watching the show has led Bridgerton to a “number one overall ranking in 83 countries, including the US, UK, Brazil, France, India, and South Africa.”

Y’all, people have even picked up the book series — you KNOW it was a book series first, right? — and have started to read it again.

I MIGHT be one of those people who watched the show, and then IMMEDIATELY went to Amazon and bought the first book.

Fans have taken to social media to show their adoration, celebrities have admitted to their obsessions, and even the original Bridgerton books that inspired the series have seen a new swell in readership.

Y’all. If you HAVEN’T yet jumped on board the Bridgerton bandwagon, you need to go, RIGHT NOW, and watch the series.

Now, I’ll admit, getting into episode 1 was difficult for me. BUT, by the time I was into episode 2, there was NO stopping me!

Bridgerton is a total MUST when it comes to shows you need to binge watch.