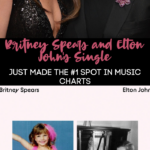 Britney Spears is back singing songs!

After a 13-year conservatorship, it’s safe to say Britney is back and better than ever, and it shows considering her latest music release just gained the #1 spot!

Collaborating with Elton John, the single named “Hold Me Closer” has managed to gain the #1 spot in 38 different countries!

Not to mention, the single which dropped today, August 26th, has already jumped to the #1 spot on iTunes in the U.S.!

Britney shared her feelings on Twitter about the recent song release which is first song in six years,

The hit single which comes from previous music of Elton John, combines the chorus of an older song named “Tiny Dancer”, including verses from another single called “The One” with a pop twist!

Congratulations to both Elton and Britney!

You can listen to the song below or you know, you can also download the collab of the two artists on iTunes too!