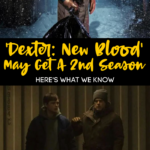 If I had to pick one series to watch repeatedly for the rest of my life it would be ‘Dexter’.

Like, I can not even count how many times I have watched the entire series from start to finish, it’s at least a once-a-year binge-watch for me and I have no shame about it.

When ‘Dexter: New Blood’ came out I was so excited to reconnect with my favorite quirky serial killer and I had huge expectations.

Some of those expectations were met and others totally missed the mark, but I kept wondering if there would be more to come.

If you have not watched ‘Dexter: New Blood’, please stop reading here because there will be unavoidable spoilers.

In the final episode, we watched Dexter get put down as if he was some sort of animal and I was not happy.

But I had a feeling there would be more to come and apparently it may be true!

Devid Nevins, the Chairman, and CEO of Showtime Networks told The Hollywood Reporter that he’s “actively working on” a future for the ‘Dexter’ franchise.

I mean, they did call the last season ‘Dexter: New Blood’, which leads us to believe that Harrison will carry on down his father’s path, right?

David Nevins also mentioned that ‘Dexter: New Blood’ was a rebirth of the franchise, so… what does that sound like to you?

I think the only way they can make this happen is if Harrison takes over the work that Dexter did and Michael C. Hall returns as Dexter to be Harrison’s own dark passenger like Harry was for Dexter.

Showrunner Clyde Phillips has also said that he “would drop everything to do it” if Showtime wanted to expand on the story with Harrison.