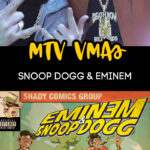 Coming in hot off the Super Bowl Halftime Show, Eminem and Snoop Dogg are about to hit the stage together again.

The pair is going to collab on the song “From the D 2 the LBC,” their duet that pays homage to their respective cities — Detroit and Long Beach, California.

This little gig is going to mark the first time either rapper has graced the VMA stage in over a decade.

The last time Eminem performed at the VMAs was in 2010 when he hit the stage to perform “Not Afraid” and “Love the Way You Lie.”

As for Snoop, the last time he was on stage at the VMAs was in 2005 when he performed “Juicy” and “Warning.”

Now, both Eminem and Snoop are nominated in the Best Hip Hop category for “From the D 2 the LBC,” and I’m crossing my fingers for a win! I LOVE these two.

This song marks the pair’s first collab in over 20 years, and I can’t freaking wait to see them perform it onstage!!

Wondering where you can find the song? You can find it as the second single off Eminem’s second greatest hits album Curtain Call 2.

Or, you know, you can go HERE and see the video for “From the D 2 the LBC” on YouTube.

Make sure you tune in to MTV THIS Sunday, August 28th to see Em and Snoop hit the stage for what I’m sure is going to be one of the best performances of the night.