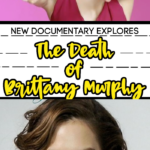 Several of my all-time favorite movies feature Brittany Murphy as an actress in them.

One of those favorites is ‘Girl Interrupted’, I think too many have forgotten that movie or have never watched it.

Another favorite that I have is ‘Uptown Girls’. My oldest daughter always wanted to watch that one and I can’t even tell you how many times that we did.

The majority of you will probably know her best from ‘Clueless’. That was probably one of her most popular roles.

When Brittany Murphy died it was pretty shocking and unexpected. She was only 32 years old and there were a lot of questions surrounding her death.

In fact, there were a bunch of conspiracies. She was healthy, yet she suddenly died after being ill for a few days.

Then not long after her death, her husband Simon Monjack died. Both of them were reported as dying from pneumonia and anemia… weird.

It’s too shocking and too fast. It just doesn’t make sense to me. As we speak, I am staring at a picture of her. I just can’t believe it. Can’t convince myself she’s gone.

Were Brittany Murphy and Her Husband Murdered?

Some people, including her own family, believe Brittany was murdered. When her husband died of the same strange illness, more people started believing they were murdered.

I’m excited to see what they pull together for this new documentary. The HBO documentary series is called ‘Nuanced’ and will be directed by Cynthia Hill.

The documentary will be a two-part series. Blumhouse Television and Pyramid Productions will be producing.

There has not been a released date announced as of yet. While we wait, we can watch Investigation Discovery’s ‘Brittany Murphy: an ID Mystery’.