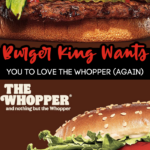 When you’re hungry enough to eat a cow, Burger King wants you to think of the Whopper.

Since the pandemic, BK has fallen behind its competitors in the fast food industry.

And to make up for their loss, Burger King has a plan to make the burger loving public fall head over heels (again), with the face of the chain and that is, the Whopper!

Within the next two years, Burger King plans to invest $400 million in improving the brand name.

This will include $250 million supporting remodels, kitchen updates, and restaurant tech while the other $150 million will be used for advertising and digital products.

One of the king’s (Burger King) plans, are to remind customers what their chain is all about and that’s lettuce, tomatoes, onions, pickles, and a meat patty sandwiched in between a sesame seed bun.

“What we really want to do in the short term is reintroduce America’s love affair with the Whopper,” Tom Curtis, President of Burger King North America, explained to CNN Business.

Not to mention, Burger King is also contemplating changes being made to the Whopper and “whether or not there are changes to the Whopper that could make it a better product,” Tom noted to CNN Business.

So what exactly went wrong with the burger chain in the first place?

During the pandemic, many restaurants followed the same pattern of shortening menus to simplify kitchen operations that came with the pandemic era.

And rather than take food items off the menu, Burger King did the exact opposite and added more food choices to the list.

“We, in fact, complicated things,” RBI CEO Jose Cil mentioned to CNN Business, “we added menu items … that were more difficult and not necessarily intuitive and typical for us to serve.”

And because of the new menu item, the sandwich “created a ton of bottlenecks operationally,” Jose explained to CNN Business.

Retirement came early for the Ch’King and was replaced with the recently launched Royal Crispy Chicken.

The sandwich “was a great product that was difficult or challenging for teams to execute on,” Tom explained. “The best thing for the guest is great flavor and consistency. So our Royal Crispy Chicken, which we just launched, offers both.”

Alongside menu adjustments, Burger King is also making other improvements look-wise with a goal to make their restaurants appear more modern.

With a plan to remodel 800 restaurants, BK also wants to focus on making the app easier for customers to order and revamp their rewards program.

We wonder if the famous Whopper will get a makeover soon? Regardless, we’ll still take the burger with fries on the side please!