When I was younger, I was one of those kids who would make up a game for everyone to play, and then change the rules right in the middle of it just because I didn’t think it was working the way I wanted it to. 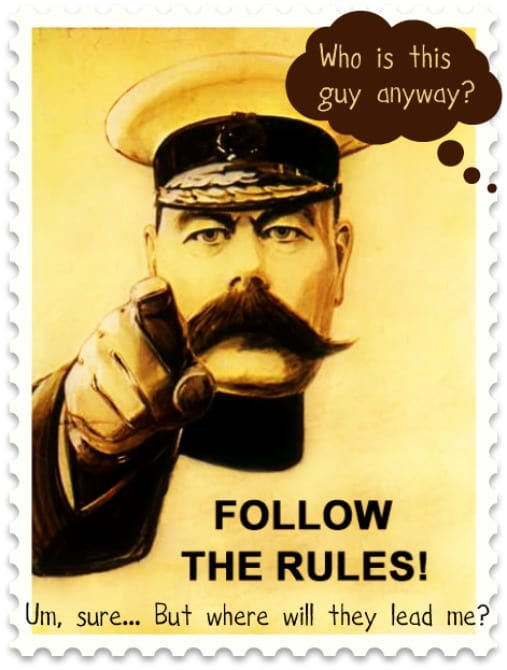 That really pissed off a lot of people, I’m not going to lie. My brother HATED this. He would throw a giant fit, usually break something of mine and refuse to play with me. I never really understood, because I was just trying to make the game more interesting.

How did he not get that?

Okay, so maybe I it was more like I was just trying to make it easier for me to win.

Either way, I’ve been thinking about rules. I watched this video recently:

(BTW, she’s having a contest on her blog here.)

She said a lot of interesting things, but the thing that stood out the most to me was the fact that she likes to take traditional stories, characters, fairy tales, etc. and redo them to be her own. I LOVE this. There’s a reason certain things are considered tried and true, but there’s also a reason they can get stale fast–so doing your own spin is a great way to take care of that.

So, what I want to know today is…

What have made your own?

Curious from the perspective of a Mom who's trying to give her son the best tools possible in life: did this impact you socially long-term? My son (7) will "mess up the game" in his peers words but saying he was on the other team or that wasn't the rules and whatnot regularly. This, of course, upsets his peers. I believe he does this because he's not confident in whatever game and/or doesn't like loosing and/or not knowing what he should be doing (he's just barely 7...). Would love some insight from an adult who experienced similar. Thank you.

I've been exploring for a little bit for any high-quality articles or blog posts in this kind of space . Exploring in Yahoo I at last stumbled upon this web site. Studying this information So i am happy to convey that I've a very just right uncanny feeling I came upon just what I needed. I such a lot indisputably will make sure to don?t disregard this website and give it a glance regularly.

In real life, I tend to follow the rules...unless they are completely stupid and make no sense (except driving the speed limit...sure it makes sense, but that one just doesn't apply to me LOL).

In my writing life, I believe rules are made to be broken, even some grammar rules. I chalk those up to "style." :) My main characters are completely made up fantasy from my own imagination and the rest of the characters don't exactly follow cannon. I made up my own rules for what they can and cannot do and even how the first ones were created. But, as a fantasy writer, once I make the rules, I have to follow them. This is one place where you can't change them mid-stream because your readers will be like your brother - only it's your book they're breaking and throwing and your reputation as a writer that gets destroyed. It's fun but sometimes challenging. And yes, sometimes I get mad at myself for doing something that doesn't make it easier to play later.

If writers don't break the rules, though, we'd never get anything different. That's what makes an author and a story new and interesting. .-= Kristie Cook´s last blog ..Procrastination...or Funk? =-.

@Kristie Cook, Okay, I love it because I totally agree... the speed limit so does not apply to me!

I have never followed a rule in my life. lol. My kids were all unschooled (definitely out of the ordinary...even with other home-schoolers, we had to be the fringe of the fringe movement) I followed attachment parenting. Not popular. Everyone swore I was going to spoil my kids by never putting them down when they were babies.Everyone was wrong, btw, they are awesome kids. :)

I even sneak into the movies...lol...don't tell...shhhhh. I'm writing a YA paranormal, but it isn't any of the usual paranormal stuff. From what I've seen, it hasn't been done before at all.

@Callie Forester, so how did you do the school thing? I want to know more!

I'm Rosemary Clement-Moore, and I endorse this blog-post.

(No. Really. Love this. Ironic, because I am, in my non-writing life, *intensely* rule-abiding. I was that OTHER kid on the playground, who would throw down on kids like you who didn't stick to the rules.)

@Rosemary Clement-Moore, that's how my daughter is... she is the QUEEN of rules at ALL times... Mom, did you sing ALL of your ABC's while you washed your hands???