Okay, yesterday I wrote about some of my favorite hottie vampires.  But I left a certain sparkly bloodsucker out.

“How dare I forget him?” You yelled in the comments.

You guys are right… he’s hotter than hot. He’s smokin’. (Pretty much in every picture… that guy smokes a LOT.) I want to lick him and get him to reenact the events of every moment that happened during that dreadful fade to black.

Edward Cullen, will you marry me? 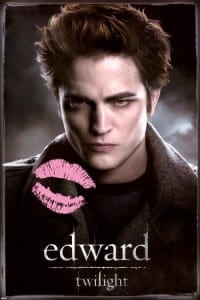 What’s a girl to say?I’m speechless when I see this picture. Maybe some of you love Twilight, many of you aren’t fans–but whatever team you’re on: there’s no denying that you want to make out with this vampire a little bit. In fact… I’ll give you two a minute.

Are you finished? Yeah, me too.

Okay, we’ve established that on a makeout-ability scale of one to ten Edward Cullen is at least a 12.

Now, we need to figure out why. What makes ladies of all ages want to rip his clothes off and, um play cribbage?

Is it his stone cold lips? His rock (as in marble) hard stomach? His witty jokes? Oh, or maybe it’s his uncanny ability to not eat woo your dad?

Um, I don’t actually know. I have no idea what makes him SO appealing. But, I’d love to hear your answers…

He's so dreamy - like literally unattainably dreamy. Like a nightmare that turned-out to be awesome. Ah, if only monsters really were caring and cuddly (even if they are cold rocks).

Maybe they put crack in the film...more likely X...whatever...point is, they must put drugs through the screen...

Ahhh, Edward. What's not to love? He's gorgeous, dangerous, plays the piano, makes a girl pass out with just one kiss and is the world's oldest virgin. *sigh* And I love him.

Are we talking about Edward Cullen or Robert Pattinson? Because those are two very different issues which I happen to spend entirely TOO much time pondering.

Edward: Because he's a bad boy (um, vampire = bad) who doesn't WANT to be. He's a gentleman, he's romantic, and he sparkles.

Rob: He's so damn fine it hurts. But he's still self-effacing and dresses like a hobo. And I still want to lick him. So, yeah. Guh. .-= Leigh (Modern Mommy)´s last blog ..Rejecting Reality =-.

@Leigh (Modern Mommy): I SO agree, I spend way too much time pondering which one is the one I am supposed to have my teenage girl crush on. sigh.

He's like almost perfectly symmetrical. It's a beautiful thing.

I think it's the bad guy in suave clothes and a sweet dialect. :)

@Tiffany: aahhh yes the clothes! How true that is... we do love the clothes.