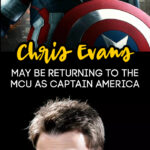 We knew it was coming…

Chris Evans’ contract with Marvel was up, so Endgame saw Captain America retire from the Avengers.

Well, I mean, there’s a NEW Captain America. But, you know what I mean. We said goodbye to Chris Evans.

You’d think that would have been the end for Chris Evans’ Steve Rogers.

But, never say never. The powers that be at Marvel have their super secret ways to bring characters back, and I wouldn’t be at all surprised if Chris Evans’ Captain America shows up again.

We’ve seen where Marvel comes out with prequels or side stories that happen in the world of the multiverse. They could totally do this with Captain America, and not screw up the Endgame story.

Now, if you ask the actor, he won’t budge on spilling any secret happenings behind the scenes.

BUT, according to BGR, Chris Evans is open to reviving the role that he made famous.

There Are Potential MCU Spoilers Ahead. Proceed With Caution.

That film is called Nomad, and many are speculating that this will bring with it the return of Chris Evans as Captain America.

Nomad, in the comic book world, is Captain America’s alter-ego. He uses it after he abandons the shield.

BGR says that, “Steve Rogers is Nomad only for a brief period, and other people have been called that in the MCU.”

Now, there are several ways that Chris Evans will show up as Nomad in the film of the same name.

First, the film could be a prequel — a sort of in between film — the events that happened to Captain America between Civil War and Infinity War.

Some think it will be about Steve Rogers in an alternate universe — one where he actually marries Penny.

The last theory is that Captain America could be from the multiverse — one that we’ll need for Secret Wars.

Side Note: Avengers: Secret Wars has been announced, and is expected to drop November 7th, 2025.

Now, this may be a way for Chris Evans to come back to the MCU. BUT, plans could change — and they often do.

Nomad hasn’t even been officially announced, so these theories could all be for nothing. LOL!