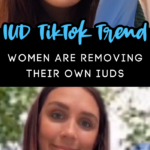 What the — ?? I don’t even have words for this right now. Leave it to TikTok to show us another stupid human trick.

This time, the trend is about the IUD. If you don’t know what that is, it’s a little device that is put in through a woman’s cervix, and into their uterus. It is used as a birth control device, to prevent pregnancies.

When the IUD is inserted, a little string hangs out of the cervix so it can be easily removed BY A DOCTOR (the string, NOT the cervix).

Now, there are women on TikTok that are removing their own IUDs. They either film a tutorial type video, or they document a sort of REVEAL of the removed IUD.

I am completely floored that I even have to bring this up. Doctors should be removing your IUDs, not you.

It is like the saying goes, “Just because you can, doesn’t mean you should.”

Why are ladies removing their own IUDs? They are having some unwanted side effects from the device (which can happen with ANY contraceptive device). Brain fog, lack of desire for sexy-time, constipation, laziness, sleepiness, sleeplessness — I mean, the possible side effects are many.

There is one other reason that women are doing this procedure at home. As one TikTok user notes, she didn’t want to drop the $300 to get the IUD professionally removed.

Okay, I get that. But, your body is nothing to play around with!

There is SO much that could go wrong if you play doctor, and try to take your IUD out by yourself. You simply don’t have the means to handle a catastrophic event at home, should one happen.

You could puncture something and bleed out. The string could break, and you would be left with a stuck IUD (doesn’t that sound nice and comfortable). You could even scrape up your vajayjay, leaving a nice healthy infection.

If it’s embedded in the muscle layer of the uterus, which can happen, it can cause a lot more bleeding, a lot more pain and it can actually bring the uterus down with it, which is not something that one would want.

Just don’t do it. Have your IUD professionally removed. Please, I implore you, have a conversation with your daughters about the danger of this TikTok trend.

I mean, the world is already having to deal with the Devious Licking TikTok Trend. Only one dumbass trend at a time, please.