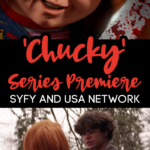 I’ve always had this weird fear of dolls, especially at night.

When I was little all of my stuffed animals and dolls would have to be tucked away in my closet behind a closed door, otherwise, I wasn’t sleeping.

When ‘Chucky’ came out in 1988, I was old enough to know dolls don’t come to life, but it still creeped me out.

Evil little doll running around with a knife and stabbing people to death… that being said, I love to be scared so I watch all of the horror movies and shows that I can.

‘Chucky’ returned a few times with new movies and even gained a bride.

Well, now he is back with his very own series!

The new ‘Chucky’ series will premiere on Syfy and USA.

The main character is a 14-year-old gay boy who’s bullied and sort of lost after the recent death of his mother. He’s a young artist [making] sculptures with doll parts. He finds Chucky at a yard sale and buys him, but it turns out that he gets much more than he bargained for.

Watch the trailer below, it looks pretty cool and I’ll definitely be checking the series out.