Categories Happy Happy, Joy Joy, Heavy Handed Advice, Hot Off The Press, Pop Goes The Culture, These Things Are Better Than Your Things 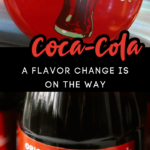 Coca-Cola is changing up the flavor of one of their soda flavors, and I can’t help but wonder if this is the “New Coke” fiasco of 1985.

Way back in 1985, Coke decided that their signature flavor needed to be updated so they tweaked the flavor just a bit — and it was AWFUL!!

Coke was trying to keep up with the growing popularity of Pepsi, so they decided to make a sweeter version of their original cola flavor. *Gag*

It was one of the “most memorable marketing blunders ever,” and I don’t mean that in a good way.

This “NEW Coke” lasted a mere 79 days (which was 79 days too long, IMHO) before Classic Coke was brought back.

So now, the Coca-Cola company is making the risky move to change the flavor of one of their sodas, and people have some definite opinions about it.

Which drink is getting an update?

Coca-Cola Zero Sugar, also known as Coke Zero is the lucky cola that is getting the tastelift.

In a statement, the company said that this new change in flavor “optimizes existing Coca-Cola Zero Sugar flavors and existing ingredients.”

So, it LOOKS like they are just changing up the amounts of the flavoring. It can’t change too much if the ingredients are staying the same.

I’m scared, y’all. Why screw up a good thing? Don’t they know Americans are AWFUL with change?!?

All listed ingredients and nutritional information remain the same.

The new Coke Zero is already being sold in Europe and Latin America, and apparently taste testers have had a positive reaction to this new formula.

I’m still scared y’all. I lived through the 1985 debacle!

This new Coke Zero is going to replace the old version on shelves in America later on this month, with Canada to follow.

I will reluctantly and cautiously try the new formula, but I’m not promising I will like it!

1 shares
Target Is Selling A Kit That Lets You Turn A Pumpkin Into A Giant Spider
← Previous
These Vinyl Nail Covers Help Protect Your Floors While Giving Your Dog The Perfect Pedicure
Next →
Click here to cancel reply.