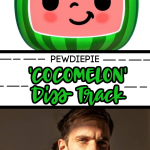 I’m a parent, but my kids are all past the stages of things like ‘Cocomelon’. In fact, I see people talking about it but really had no clue what it was.

When my oldest was born, we had Steve from ‘Blue’s Clues”. He was the best, even I enjoyed watching the show.

Interest in Blue’s Clues at our house dwindled when Steve left the show.

Then there was ‘Caillou‘, yea that one was banned from our house.

These days it’s ‘Cocomelon’. I had to look into it and see what all the talk was about.

‘Cocomelon’ is a video series for kids that has nursery rhyme songs. Seems like some parents don’t care for it.

I’ve read that kids that watch ‘Cocomelon’ fall into some crazy trance like episode. Then when it’s over they have full blown meltdowns, is this true?

Parent’s were asking PewDiePie to make a ‘Cocomelon’ diss track. He said he would if a certain video clip hit 500,000 likes.

Well, that happened, so PewDiePie made the ‘Cocomelon’ diss track. I’m going to have to listen to it a few more times to figure out exactly what is being said.

Check it out below and let me know what you think!