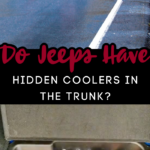 Not only because they’re recognized on the road with a peace sign or a soft wave, but we even found out that the square vehicles have their own hidden Easter eggs.

Therefore, it’s no surprise that another Jeep owner on TikTok has gone viral for finding yet another hidden gem inside of his Jeep.

In the back of your Jeep’s trunk, you might find a medium-sized, square-shaped hidden compartment that doesn’t look like much at first impression.

Thanks to @brandon.haneline for his treasure hunt search introducing the hidden compartment, with a few ice bags and several cans of Dr. Pepper, the Jeep owner turned the compartment into a cooler!

Dumping in an entire case of Dr. Pepper and a full bag of ice, the TikToker showed that the hidden compartment in the back of his Jeep can be used as a cooler to store several sodas.

Do Jeeps have a hidden cooler?

Including a drain plug in the center to release the melted ice at the end of the day, the question is, is this compartment really a hidden cooler or just another unique feature in the Jeep brand?

While many users on TikTok have also showed the same hidden feature in the back of their Jeep, others have noted that the “drain plug” should not be used to drain water, according to a Jeep forum site.

So while there might be a hidden compartment in the back of some Jeeps, depending on what type of Jeep you have stored in the garage, it may not be best to use it as a cooler after all.