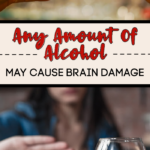 I’ll admit, I like a nice glass of wine, or a tasty dirty vodka martini, as much as the next person.

BUT, there is a study out of England that has me pretty much scared to death.

Researchers out of the University of Oxford have found that there is no “safe” level of alcohol when it comes to damage to the brain.

Even a small amount of alcohol has been shown to affect the gray matter of the brain — the “important bits where information is processed.”

With dementia and Alzheimers being more prevalent than ever, we really should be doing whatever we can to spare the important bits of our minds.

That just might mean foregoing that nightly adult beverage that helps us unwind.

The researchers at Oxford held an observational study (which was not peer reviewed — take that for what it’s worth) to determine if there was a “safe” level of alcohol that one might partake in.

The findings were grim, IMHO.

They noted that the more people drank, the less volume of gray matter they had.

Now, alcoholic beverages are considered a modifiable risk — that means you can choose to avoid alcohol, unlike aging, which is going to happen to everyone, no matter how hard you try to avoid it.

While alcohol may be shown to have a small effect on memory and gray matter, it is actually the LARGEST modifiable risk when it comes to affecting the brain.

Whilst alcohol only made a small contribution to this (0.8%), it was a greater contribution than other ‘modifiable’ risk factors.

I don’t know about you, but I need all the gray matter I can get.

If I’m doing things that shrink that gray matter, I need to cut them out.

The team of researchers found that it really didn’t matter what type of alcohol people were partaking in.

Consuming any amount of alcohol was worse than not drinking it.

The researchers noted that there are certain characteristics that people might have that might add to the problem.

If you are obese, have high blood pressure, or tend to binge drink, you might be more at risk for developing negative mental issues — like dementia.

As we have yet to find a ‘cure’ for neurodegenerative diseases like dementia, knowing about factors that can prevent brain harm is important for public health.

Sadie Boniface, head of research at the UK’s Institute of Alcohol Studies

We have known FOREVER that alcohol can cause all kinds of problems, both mentally and physically.

As a nurse, I have seen and cared for people who were having liver problems as a result of alcohol intake.

My uncle even passed away from liver cancer that was due, in part, to a low to moderate level of drinking.

Now, I know, everyone is different, and everyone can be affected differently.

But, we have not been able to pinpoint exactly how much alcohol is TOO MUCH alcohol when it comes to affecting the mind and body.

According to this study, you just might be better off avoiding all of it.

Yeah, I don’t really want to hear that either.

It is fun to go out with friends, and enjoy an adult beverage or two.

It’s relaxing to be able to come home in the evenings, and pop open a bottle of wine.

If alcohol is going to play a role in me slowly forgetting, I can put that drink down.