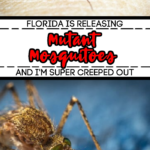 I don’t know if you read about this last year or not, but there are some strange things going on down in Florida.

Last year they had revealed that they were going to be releasing 750 million genetically engineered mosquitoes in Florida.

If there was ever something important that I learned from watching movies, it was to NOT mess with genetics!

You just don’t do that! I mean, has anyone seen Jurassic Park?!

The first release of the genetically modified mosquitoes in the United States began this week in the Florida Keys, I’m a bit scared.

The first phase is 12-weeks, blue-and-white boxes containing about 12,000 GMO eggs have been placed in six small areas of Ramrod Key, Cudjoe Key and VacaKey.

When you add water the mutant mosquitoes hatch, then after they mature they will enter the environment.

This plan is to release over 750 million genetically modified mosquitoes there in 2021 and 2022.

Local residents and environmental advocacy groups are not happy and I’m with them!

This is some scary sci-fi stuff! Just read this statement from Jaydee Hanson below!

With all the urgent crises facing our nation and the State of Florida — the Covid-19 pandemic, racial injustice, climate change — the administration has used tax dollars and government resources for a Jurassic Park experiment. Now the Monroe County Mosquito Control District has given the final permission needed. What could possibly go wrong? We don’t know, because EPA unlawfully refused to seriously analyze environmental risks, now without further review of the risks, the experiment can proceed.

Jaydee Hanson, policy director for the International Center for Technology Assessment and Center for Food Safety, in a statement released Wednesday.

Apparently they are trying to release this mosquito in Harris County, Texas as well. That is way too close to home for me!

Local health officials confirm that there is no agreement in place or plans to move forward with the project at this time. Our focus is on our efforts with the Covid-19 pandemic.

The goal behind all of this? They want to see if the GMO mosquito will be a good alternative to spraying insecticides to control the Aedes aegypti.

The Aedes aegypti is a mosquito that carries diseases like Zika, yellow fever, dengue, and chikungunya.

Is This How We Get Zombies?

They say that this new mosquito called the OX5034 is male and is programmed to kill only female mosquitoes.

Our opposition has been long and strong. We live here, this our home, and they’re forcing this down people’s throats.

How will this affect other wildlife? Like birds, and other insects that feed on mosquitoes?

Let me know how you feel about this in the comments. I would rather take my chances with the illness than a genetically modified bug running loose.

The only thing you can do legally at this point is stand in your yard with an insect fogger. You can’t touch a box, but you can fog the s**t out of your own yard if you don’t want to be a part of the trial.

Mara Daly, a resident of Key Largo, Florida, who has fought the release for eight years

Truth in life is ,all things start at the bottom and climb the ladder ,to the top ,,and sometimes are able to keep going beyond our reach, Bug to bug , animal to animal ,mammal to mammal ,human to human , mutation to mutation ,and one day ,death to all things that breath air ,,