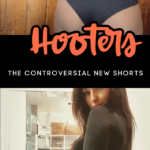 Hooters restaurants are known for their scantily clad waitresses, but the new shorts the waitresses were just issued look more like panties than short shorts.

I’m not a prude, but I can’t go to Hooters. It makes me hella uncomfortable — even if they have yummo wings.

Please tell me I’m not the only one who feels this way.

But, if I thought the waitresses’ clothes were skimpy before, yikes!! They just got even more revealing, and some of the workers are super unhappy.

They have taken to TikTok (of course) to air their grievances, just like so many TikTok users have done before.

You see, the shorts that the waitresses are now required to wear as part of their work uniform are a bit closer to panties than they are to actual shorts.

They don’t even fully cover their booties!

This new move on the part of Hooters is making waitresses want to quit, and I can’t really blame them. Can you?

Even most bathing suits cover your backsides up more than these shorts do!

All right so we all know why half the Hooters girls want to quit … and it’s because of the new shorts.

Now, it is important to note that there are some waitresses who don’t mind this new look. They are gladly wearing the new shorts, and even like them.

It seems that the Powers That Be over at Hooters have heard the cry of some of the waitresses. @sick.abt.it posted a follow up to her initial viral video of the shorts. She says that the CEO of Hooters contacted her, and told her that they could wear the old shorts. It obviously makes her beyond happy.

As we continue to listen and update the image of the Hooters Girls, we are clarifying that they have the option to choose from traditional uniforms or the new ones. They can determine which style of shorts best fits their body style and personal image.

The whole reason Hooters went to these new shorts is because when they tested them in several Texas markets, the shorts were a smashing success.

However, once they rolled these new shorts out, Hooters quickly learned that not all their employees are comfortable with letting their goods hang out.

So, the Hooters girls now have the option of wearing the old shorts — which were already hella revealing — or they can wear the new shorts — which look like panties.

*In their defense, the waitresses CHOOSE to work there. They aren’t being forced into a degrading situation. They do it willingly.

The whores look good to mask the food.

@HootersHdq, it’s okay buddy, not everyone can be good at trolling, and women don’t like you either.