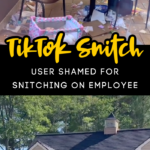 A lady on TikTok was shamed by commenters for “snitching” on a Dunkin’ Donuts worker, and I have mixed feelings about it right now.

The video was posted by @stephlobstahgrl, and it has garnered more than 4K comments — many of them criticizing “Steph” for outing the worker that was apparently living in the store.

The automated TikTok voice says that Steph stopped to get coffee at Dunkin’, but couldn’t go in the building.

You had to either place your order online and pick it up at the door, or you had to go through the drive through — where the line was ridiculously long.

The customers who had to go to the door to pick up their order were not let inside the building, but they could see what was going on through the windows.

And, what they saw was a complete mess. There was trash, cardboard boxes, a playpen, kids’ toys, blankets, and more trash strewn all over the lobby of the store.

Now, it’s obvious that what people were witnessing was, at the very least, someone bringing their kid to work with them.

What COULD be happening is that an employee was having a housing crisis, and living in the store with their kid(s).

Okay. Let’s play devil’s advocate, and take the side of the employee who may be struggling financially and in dire straits.

The housing situation SUCKS right now. There is hardly anyone who isn’t one or two paychecks away from homelessness, themselves, as we speak.

At least the person has a job, right? They are trying to make it in this world that isn’t giving us much financial leeway lately.

It would be really tempting to just hole up in your place of employment, and try to make a go of it.

Daycare is also hella expensive! It can nearly break a person to try and work, afford housing, food, utilities, and then daycare on top of those expenses.

I can see WHY a person might decide it is in their best interest to move into their place of employment to make things financially easier.

ON THE OTHER HAND

Just no. This is a complete mess. This has fire code and safety hazard written all over it.

There is NO WAY this eating establishment would pass an inspection by a health inspector in its current condition.

How on earth is this even sanitary? I sure wouldn’t want to get something to eat or drink from a business that looked like this.

This is a place of employment, not a daycare or homeless shelter.

I can maybe see, and justify, an employee moving discreetly into the BACK ROOM for a night or two while they figure things out, but this is just a wreck.

To have your lobby looking in such disarray is unexceptable, IMHO.

Now, the scene IS heartbreaking. It is obvious that someone is struggling.

But, coming from a background in retail, there is NO WAY this would be allowed from a business perspective.

I’ve seen people get fired for spending even one night in the backroom of their business.

BUT, I hate it that someone is obviously in such financial need.

Dunkin’ Donuts did respond to the video saying, “Thank you for flagging this to us. We have identified the location and elevated directly to the franchise owner.”

Bruh. What if it IS the franchise owner?

Keep in mind, we don’t know the entire situation. There is another whole side to this story that we haven’t heard.

What do YOU think?

To see the entire TikTok video by @stephlobstahgrl you can go HERE.