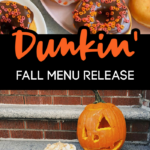 Fall is right around the corner and everyone is starting to release their products!!!

If you haven’t seen it yet, we’ve already uncovered all of Starbucks plans for their fall products, but know we know Dunkin’s too!

Their first launch is set for August 18th, and will release four fall based drinks and six fall food products!

If the word maple is included in ANYTHING, I am SOLD. Not to mention how much I already love bacon!

If that wasn’t enough, there’s a SECOND fall launch that starts on October 13th, which will include all the goodies for Halloween!

This launch will include a Peanut Butter Cup Macchiato, a Spider Donut, and Halloween Sprinkle Takeover on their products!

Which product are you most excited about? For me, it’s definitely the maple bacon products! (drool)

I don’t like anything pumpkin but I love maple anything. I’ll take regular coffee, but I am curious about the guatamalia coffee

Pumpkin donuts for sure

I wish they would bring back the maple pecan flavor for coffee!

@Linda, I totally agree! I don’t want al the fancy coffees. I just want my regular coffee with the Maple flavoring!

Oh my God wait already if it's coming out in August that's a little too soon who am I kidding I'll be getting my ice pumpkin coffee and muffin,!!!!!!!!?