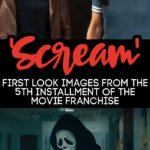 If you knew that line, then I bet you are a fan of the ‘Scream’ movie franchise just like I am!

I can not wait for this fifth installment of the movie to come out!

The movie is simply titled ‘Scream’, not ‘Scream 5″ or anything like that… just ‘Scream’.

This is the first ‘Scream’ movie that is not directed by the late Wes Craven, and it’s being directed by Matt Bettinelli-Olpin and Tyler Gillett, with Paramount and Spyglass Media Group.

Three Of The Original Cast Members

There will be a new group of teens that are tormented by Ghostface, however, stars Neve Campbell, Courteney Cox, and David Arquette are on board!

It was a wildly anxiety-producing situation. They were not disposable roles; they were very, very important and the heartbeat of what was great about the script. We couldn’t imagine the movie without any of them and so not having that perfectly locked-in right off the bat was definitely scary.

The movie is about a new killer who takes the Ghostface mask on as their own identity to target teenagers.

I genuinely was in two minds. The idea of making these films without Wes Craven seemed challenging to me. I loved the man very much. But Matt and Tyler wrote me a letter, speaking of their appreciation and great respect for Wes Craven, and speaking of the fact that the very reason that they are directors today was because of these movies and because of Wes, and that meant a great deal to me.

Shooting for the new ‘Scream’ movie took place last fall in Wilmington, N.C., where Neve Campbell, Courteney Cox, and David Arquette joined up with the newcomers as well as old friends from previous ‘Scream movies.

One thing I found super interesting is that they kept the details of who was behind the Ghostface mask from the cast until they got to a point that they couldn’t hide it any longer.

We were really careful to protect the big reveal of the movie. We went as far as to withhold those moments in the script from the actors. We wanted everybody involved, to the degree that we could, to be a part of the whodunit. Obviously, you get to a point in the shoot  where you have to let the cat out of the bag, but we went pretty far into prep and into production with a surprising amount of secrecy maintained.