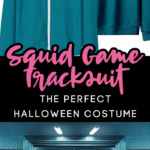 In your search for the perfect Halloween costume, you just might want to consider that Squid Game tracksuit.

There is no denying the hit that is Squid Game. Millions of watchers on Netflix have turned this word-of-mouth series about killer Korean kids games into a massive must-watch show.

Squid Game is currently number one in 90 countries, and there are even people recreating the games on TikTok.

While I wouldn’t necessarily recommend recreating the disturbing — psychotic even — games from Squid Game, I would definitely recommend borrowing from the show to make your Halloween costume this year!

Halloween is right around the corner, and so many costumes follow pop-culture and what shows are popular — and there is NO denying that Squid Game is hella popular.

You really have two ways to go here. You can either dress yourself in one of the green tracksuits that the competitors wear, or you can don a red jumpsuit and be one of the masked guards (and just possibly scare the bejesus out of a few people).

Either way you go, there is no doub that EVERYONE will know who you are supposed to be — sometimes it’s so hard to tell what people are going for with their costumes. LOL!

If you are one of those last-minute costume connoisseurs, you can totally make your own. A simple TikTok search for #SquidGameCostume will give you about a million different ideas to quickly make a pretty darn good replica.

Heck, you could even throw on a green t-shirt with a number in the upper left corner or a red t-shirt with a circle, square, or triangle on it, and I have NO DOUBT that people will get it.

Maybe you are not a crafty costume kind of a person — that would be me. There are also a ton of Squid Game costumes that you can purchase online ahead of the holiday.

To get your own Green Tracksuit Costume, you can go to the Amazon website. They range from about $30 to $50, and they are worth every penny. (Can you just imagine showing up at the gym in this suit after Halloween. LOL!!)

You can also get the Red Jumpsuit version from the Amazon website. They run about $40 to $50 as well.

Either way, you can’t go wrong!!