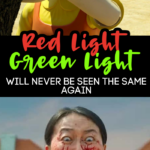 Did you ever play ‘Red Light, Green Light’ as a child? If you’ve Squid Game, chances are, that game is now ruined for you.

Being the first game in the show, players thought it was a simple childish game of Red Light, Green Light…until the first player messed up.

They quickly discovered they were playing for their life, which caused complete panic and chaos, resulting in a TON of deaths.

To take such an iconic kids game and turn it into a complete bloodbath stunned audiences. So now it may be a bit creepy seeing your kids play this…

It’s haunting to me, because the players didn’t know in the first game that it was going to result in death. They were never given a chance. At least after that, the other players knew what to expect.

And now seeing TikTokers and others doing recreations…I’m like, NO THANK YOU. I think this game is shelfed for me.